Hagiography and Historiography in Medieval Iceland

On October the 16th 2014, an open lecture was held at the Faculty of Arts of Charles University titled Hagiography and Historiography in Medieval Iceland; the main speaker being Professor Ásdís Egilsdóttir from the School of Humanities in the University of Iceland. The lecture proved to be an interesting insight into the medieval era while successfully outlining the limitations as well as the benefits of the hagiography and historiography when applied to this particular period. 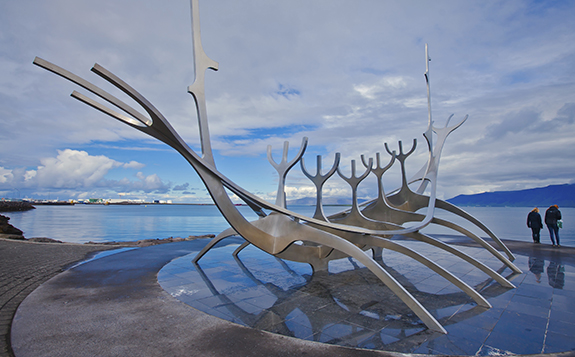 Medieval Iceland is an area of interest to both historians and hagiographers alike due to its rich and diverse heritage, with peoples from Viking, Irish and Saxon descent living there at this time; a small population estimated at forty to sixty thousand. A period when the Christian beliefs were upheld but so were the Norse. This in turn is of significant interest to hagiographers, who study the religious texts and literature, assessing the similarities and differences between each separate source and through this gaining a small insight to what the belief system must have been like at the time. As well as noticing particular writing styles which accumulated grew and evolved. When the subject of Icelandic literature is bought forward, the Icelandic sagas usually come to mind along with the Icelandic national assembly, the Althing.

However this particular lecture showed that many more texts which originate from Iceland are also available. These are mostly religious sources, often the lives of saints or particular religious events, often accounts of miracles. Due to the large amount of Icelandic religious sources available, a renowned author Thomas Heffernan who was referred to by Professor Ásdís Egilsdóttir during the lecture prefers the term sacred biography to hagiography. This is for a number of reasons, firstly because the majority of Icelandic medieval texts are related to religion, secondly the author had the same set of beliefs of the people at that time, and finally each sacred biography or religious hagiographic text is based on an specific structure. For example if an event is unknown – such as the childhood of the saint – the author would portray the saint as an religious prodigy; a perfect child but always devoted to religion.

As stated by Professor Ásdís Egilsdóttir it is important to understand the difference between hagiographers and historians. Though they both rely on each other as well as sources of medieval Icelandic literature an historian distinctly deals with the narration of the past, linking each event together to create a timeline of proceedings. While a hagiographer in general deals with each piece of literature separately determining the style of writing and if there are any similarities or differences to any other text written around the same era and location. Despite this through the study of both these disciplines, Professor Ásdís Egilsdóttir explained that a window can be opened into the past, with aspects of everyday life being shown. Such as medical proceedings, belief systems, types of agriculture as well as the typical food stuffs available for the population.

Why then are the extracts of surviving literature originating from medieval Iceland so important to both historians and hagiographers? This Professor Ásdís Egilsdóttir explained was due to a lack of surviving medieval structures within Iceland. The majority being wooden therefore have disintegrated through time, either through fire, age, or another tragedy. This when compared to other areas of medieval Europe inhabited by the same genre of people such as England and Ireland, where those structures still stand, results in a larger amount of sources material and literature are available to scholars of medieval central Europe. However it shows what sources those studying Icelandic history are lacking. Confirming the reliance that those who study medieval Iceland have on these particular texts.

The lecture as a whole was extremely interesting and showed an area of history which is little studied within Western Europe despite being an important part of European history. The Charles University Faculty of Arts proved to be an appropriate setting for this lecture, with the University offering courses which deals with this era. For further reading a main text associated with this particular subject includes “Sacred Biography, Saints and Their Biography in the Middle Ages, published in 1988 written by Thomas Heffernan. Many thanks to Professor Ásdís Egilsdóttir, for such an interesting and insightful lecture at the Charles University Faculty of Arts.