Saturnin, the 1942 novel by Zdeňek Jirotka, has proved to be enduringly popular with Czech readers, and it's not hard to see why. The novel tells the story of a well-to-do young man and his mischievous, quick-witted servant, as they encounter demanding family members, charming young women, escaped lions and troublesome plates of doughnuts.  With an English translation currently in reprint from the Karolinum press, Saturnin is a perfect introduction to Czech humorous writing. This novel is currently for sale in hard-back edition at the Charles University bookshop. 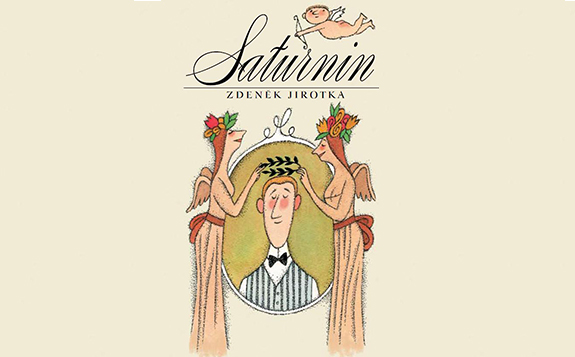 Written at a time of international turmoil, Saturnin provided readers from the 1940s with a thoroughly enjoyable story, full of funny plots and intrigues, ironic philosophical musings and an unforgettable title character. The novel's popularity has not waned since its first publication; Saturnin has been adapted for film and television and translated into six foreign languages.

The story begins when the unnamed narrator hires a "gentleman's gentleman", the titular Saturnin. It soon emerges that Saturnin is far from an ordinary manservant. As he performs his duties, this manservant slowly sets about transforming his boring employer into a man of mystery and adventure. The action of the novel moves around from a houseboat on the Vltava to a secluded, remote country house, and our two main characters succeed in both creating and resolving extraordinary situations wherever they go. The novel boasts a rich array of characters, such as the wise Dr. Witherspoon, the charming Miss Barbara, and a mercenary aunt who plagues the narrator throughout the book. The stand-out character is of course Saturnin, a manservant in the tradition of P. G. Wodehouse's Jeeves and yet interpreted in a wholly original way. Although the title character of the novel, Saturnin's presence appears to always be on the fringes of the plot and the clueless narrator never quite realises the extent of Saturnin's influence on the extraordinary events surrounding him. Saturnin is an enigma throughout the story, he is at once dangerous and benevolent, and as such is a wonderful comic catalyst for the events that occur in the novel.

Saturnin is written in a light-hearted style, combining first person narration with witty observations and anecdotes. The novel frequently deviates from the plot to enumerate far-fetched theories regarding human behaviour (for example, the novel's famous theory that all people can be categorized depending on their reaction to a plate of doughnuts). However, far from disrupting the plot, these flights of fancy sit well within the novel's episodic nature, and provide much of the novel's humour. Though the plot of the novel may seem light-hearted and superficial, the novel's subtle ironies and satire prevent Saturnin from becoming a saccharine modern fairy-tale. Without doubt, the novel is as sharp as it is sweet. Jirotka was even unafraid to turn his satiric vision on to fiction itself, as the final chapter gently pokes fun at the novels of the day.

Though Zdeněk Jirotka was undoubtedly influenced by contemporary European comic writers such as P.  G. Wodehouse and Jerome K. Jerome, this novel does not feel like a mere imitation. It is rather a Czech interpretation of a classic comic set-up. Mark Corner's English translation does not shy away from these comparisons. Instead, his decision to use names from Wodehouse's novels for the minor characters (Bertie and Aunt Agatha) highlights the connection. Saturnin does not suffer by the comparison; the novel is capable of holding its own against its British counterparts.

The hardback edition of the novel is accompanied by Adolf Born's colour illustrations. These complement the whimsy of the story nicely and transform the novel into a colourful celebration of storytelling. Although this novel may be a Czech treasure, it is easy for English language readers to understand and appreciate its many subtle ironies and laugh-out-loud moments. This novel is a delight to read, and can be particularly recommended for fans of Wodehouse and British humorous fiction.