Christ’s Crucifixion: The Case of the Crown of Thorns

As the Easter weekend passes here in Prague, the postcard photographs and paintings of Christ are everywhere, seen available to buy at the markets and local stalls or plastered on street walls across the city. We are all familiar with the image – Christ, pinned to the wooden cross, limply hanging in a position of suffering, head hung low with the prickly, painful Crown of Thorns piercing his temples. It is a haunting presentation of Christ’s sacrifice to humanity, the harrowing crown depicted as the mocking sign of monarchical rule of the Son of God.

This image of the crowned Christ has endured through history, an emblem of affective piety, the crown itself serving as a painful reminder of his cause. But where did this image of Christ crowned in thorns originate and how has it become one of the most enduring depictions of Jesus in visual history? Dr. Emily Davenport Guerry’s compelling lecture titled Passion Relics and Patrons between Paris and Prague sought to answer this question as the eighth lecture in the ‘Medieval Conceptual Conflicts and Contrasts: Text and Image’ series held in the Faculty of Arts on Wednesday 12th of April. Dr. Davenport Guerry is a current lecturer in Medieval History at the University of Kent, as has taught at Oxford and York in the past, with a special interest in relic culture and Christian iconography. 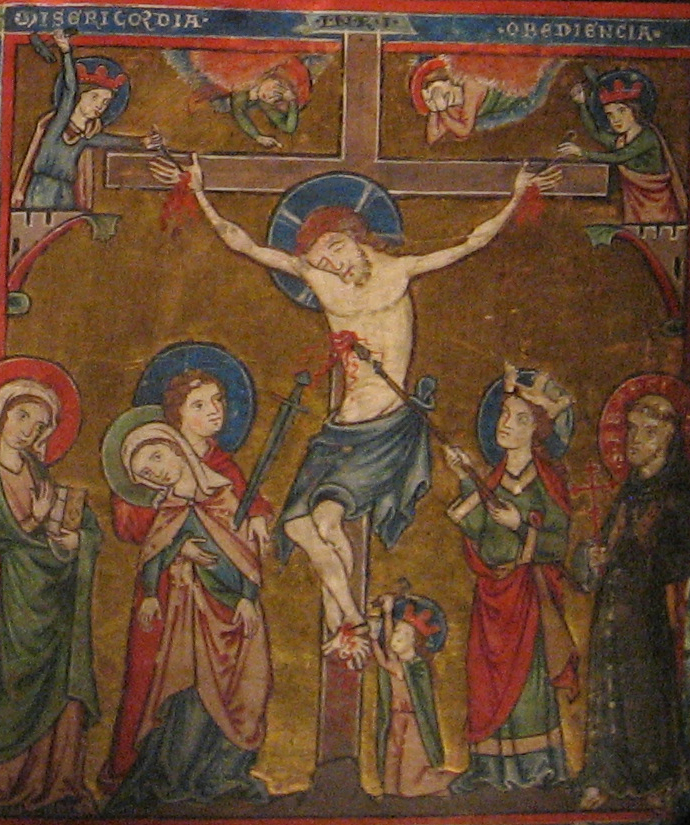 Warmly welcomed by the host of the lecture series Professor Jan Čermák, Dr. Davenport Guerry began her lecture with what sounded like the title of an Agatha Christie mystery novel, The Case of the Crown of Thorns. Intrigued by this introductory title, the Crown of Thorns took on this sense of illusiveness to the audience members, a sense that was explored further in Dr. Davenport Guerry’s fascinating insight into the origin story of the visual relationship between the Crown of Thorns and Christ himself. She began with a story, the narrative behind a collection of stained glass windows in the magnificent apse of the Sainte-Chapelle, the holy royal chapel of the Kings of France situated in the heart of Paris.

These stained glass windows illustrate the famous procession held in Paris by King Louis IX, where he proudly bought the Crown of Thorns relic in 1239 from the Latin Emperor Baldwin II of Constantinople, after Baldwin was in dire financial need. In exchange for 13,134 gold pieces, Dr. Davenport Guerry explained, Louis IX was able to acquire the relic of the Crown of Thorns, the emblem of physical kingship and spiritual holiness, and his procession therefore venerated Paris as the new location of Christ’s passion.

In her own words, this ‘spectacle of civic triumph’ led Louis IX to consecrate the Sainte-Chapelle (completed in 1248), to exclusively house the Crown of Thorns and other relics he had acquired, producing a striking and lavish alter in which to display the devotional objects. The presence of the bright green Crown of Thorns held in the hands of Louis IX and Archbishop Gauthier Cornut in the stained glass windows, inside the very chapel which was built for the relic’s own housing, therefore, serves as the narrative schema of the crown’s journey to Paris. This bright green crown, beautifully detailed with twists and leafy shapes puts the relic at both the centre of the viewer’s mind and the symbolic space of the chapel which surrounds it.

This arrival of the Crown of Thorns in Paris during the 13th century is highly momentous, Dr. Davenport Guerry states, as there is no trace of any early Christian author or image which depicts Christ with the Crown of Thorns that would predate the arrival, suggesting the image is not rooted in scripture. Christ, in his passion, with the thorny crown atop his head is an image which simply does not exist before the 13th century.

The mystery surrounding the title of the topic seemed to gather once more at this notion put forth by the guest lecturer, as the source of this image of Christ was slowly being attributed in the audience’s minds to King Louis IX himself. Any reference to the relic in the gospels merely states that Jesus’ persecutors ‘twisted together a crown of thorns and set it on his head’ (as seen in Matthew 27, with similar statements in Mark 15 and John 19), but it is very unclear if he continued to wear the crown of thorns in the subsequent events of the passion and his crucifixion as it is just not declared. The relic, in fact, is hardly mentioned after this reference in the Bible, and it is not until St. Paulinus of Nola speaks of it much later in 409 AD that it is even considered a significant instrument of Christ’s passion. It is only after it is sold to Louis IX that it does gain the significant spiritual currency as a sanctified holy object, as Dr. Davenport Guerry quotes the King’s biographer Geoffrey of Beaulieu and his comment on the relic: ‘Christ had crowned Paris, and the Sainte-Chapelle revealed the crown to all.’

Dr. Davenport Guerry had presented to the audience exciting concept; could Louis IX really be responsible for the most famous image of Christ in the collective Christian iconography? The mystery of the crowned Christ image was growing, and after the guest lecturer expertly discussed the restoration of destroyed statues and objects of this image during the French revolution, the lecture reached its highlight when the audience were finally shown proof of the Dr’s hypothesis.

During her work in Sainte-Chapelle, Dr. Davenport Guerry had herself discovered a terribly worn but still recognisable painting, hidden behind the ancient, damp curtains of the Chapel’s alter. Three meters high, and three meters wide, it was a fantastic and remarkable find, as the mural itself depicted the earliest known paintings of Christ’s crucifixion with him wearing the Crown of Thorns.

The Sainte-Chapelle team were able to use high-tech scanning devices and X-rays to confirm the date of the mural as around 1248 (the same date as the completing of the chapel), and were able to identify pigmentation of the oil painting as green, marine and vermillion. The green pigment, alongside the scores in the wall insinuate that Christ, with his band of green thorns (just as in the stained glass window depiction where Louis IX holds the crown), was indeed portrayed here in his crucifixion scene with the crown on his head. The image was, as Dr. Davenport Guerry stated, a ‘site specific invention and innovation’, as this new form of iconography had originated in Sainte-Chapelle, from the act of the King carrying the relic through Paris. There is no image of Christ with his crown at his crucifixion which predates the painting, and the inception of the idea that Christ continued to wear his crown after the mockery only starts to appear after 1250, in statues and manuscripts which surround the radius of the Sainte-Chapelle in Paris.

This new iconographic image of Christ became the most recognisable and enduring image seen today, but what is truly fascinating about Dr. Davenport Guerry’s excellent lecture is how she drew attention to the semantics of the crown. It did not simply serve as link between God and monarch for Louis IX, but the crown itself came to signify a re-imagined idea of Christ, as one which goes beyond the crown as an instrument of the passion, but rather as a coronation item of his eternal suffering and sacrifice, with Paris at the centre. The role of the object significantly shifted, and changed the course of representation in Christian art ever since.