As a Pharmacy student at my home university, during my Erasmus traineeship I have been staying in the city of Hradec Králové, where Charles University has its Pharmacy faculty. Here, I have been working in the department of Biological and Medical Sciences, specifically with a group of scientists who are researching endothelial dysfunction. 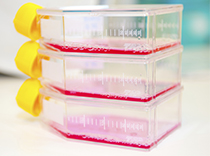 To try and confirm the hypothesis, throughout my stay here, I have had the chance to try various techniques that are used but have mostly been focussing on Western Blotting. Western Blotting is a method used to distinguish protein expression with the possibility of being able to quantify changes in protein expression also. Prior to Western Blotting, electrophoresis has to be carried out to separate proteins based on their molecular weights. Ultimately each ‘blot’ represents a specific protein from a different sample. Therefore, these blots can be analysed by intensity (a darker blot represents up-regulation of the protein). We would usually expect a difference in expression of inflammatory mediators, such as COX and iNOS, between the two samples, indicating whether inflammation is present or not. 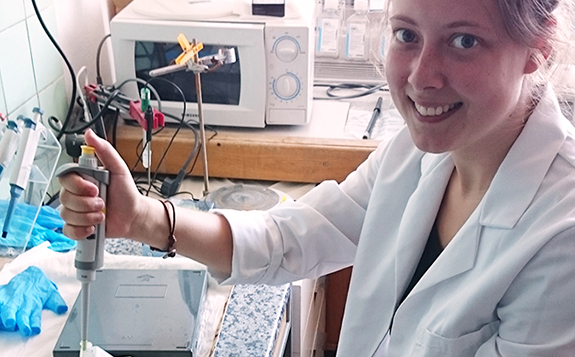 I have also had the chance to see an ELISA and immunofluorescence tests which identify protein expression. ELISA works based on specific binding, which produces a colorimetric result. In the instance I observed an ELISA, it produced a yellow colour at the end point of the reaction. The intensity of the yellow is measured which directly correlates to the amount of protein present. As a large number of samples are tested in one go, the intensity of one sample can be compared to the other samples present. On the other hand, immunofluorescence works by binding of an antibody, with a fluorescent marker attached, to a specific protein. This can then be examined under a microscope and can be used to locate where in a cell a protein is expressed. In our case it is useful to know whether various proteins are expressed directly by vascular endothelium or inside the atherosclerotic plaque itself.

It has been very interesting for me to see and try Western Blotting, along with the other techniques, as we learnt about them in our lectures and many of us wondered when we might possibly ever use them! It was certainly useful to have the background knowledge to the techniques allowing a deeper understanding of what was actually happening. Furthermore, I had no idea Western Blotting usually takes around two days to complete – our lecturers had made it sound like it could be done in half an hour!

My time here has also taught me science doesn’t always go to plan – even when you follow the instructions to the letter. For instance, getting a good result in Western Blotting is often very tricky and as there are so many steps it can be very hard to identify what went wrong and how to correct it. This can be particularly disheartening after two days hard work, especially if you need the results urgently!  People say ‘there’s no such thing as a bad result’ but in Western Blotting that could certainly be disputed when you’re in the dark room and nothing is showing up on your membranes!  Nevertheless, I feel this experience has given me a realistic insight into laboratory work, when things don’t always go right the first time and perseverance is often required.

Overall, gaining some experience in a laboratory environment has been really valuable for me as it’s not something I’ve seen much of before. Not only has it allowed me to consider whether this might be a career I would like to pursue in the future but it has also given me an understanding to the wider context of pharmacy and what a career in pharmacy can involve, whilst relating what we have learnt in lectures to reality.