Few national holidays are more significant in the Czech Republic than November 17 - marking two major events in their history 50 years apart: the murder of Czech students by the Nazis in 1939 and the harsh repression that followed, and the start of the Velvet Revolution in 1989 that brought down totalitarianism in Czechoslovakia.

Many Czechs (including students so central to both dates) commemorate the holiday each year, taking part in numerous events across the country as well as in Prague: from a procession at Albertov to peaceful demonstrations and concerts at Národní třída (National Street) and Prague’s Wenceslas Square.

Cooperation between different non-profit associations took on a new urgency or meaning after 2015, the year when the site of Albertov was essentially co-opted by politicians for rather adverse political ends. Then, a stage offered space to populist and in some cases extreme views, a stark contrast to the democratic principles, humanistic values or message of inclusion and celebration that usually are the focus of this day.

Many became more engaged as a result, and Festival svobody (Festival of Freedom) now brings many different organisers now under one umbrella and one logo: a V for victory sign or peace that is both a hand and keys being jangled - the way hundreds of thousands of demonstrators back in 1989 let their discontent with the regime be known. 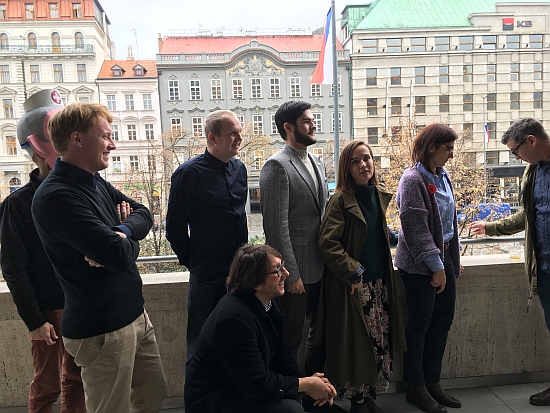 Earlier this week, co-organiser Jan Gregar told me more about November 17 and its meaning 29 years after the events:

“Frankly, I believe this holiday is the most important one all year. It is perhaps the legacy of 40 years of communism that we are not really celebrating national holidays, you know? This specific holiday gives people a connection to civic society. Because it was ordinary people who were striving for change back in 1989.

“That said, we also should not forget the events of 1939 and students during and just prior to WWII. The holiday is a good impulse for us to try and attract people back to very important topics like freedom and democracy.

“Over the last 29 years, developments in the Czech Republic weren’t always good – there were many crises and some mistakes were made – but after 29 years, we are still here and we have democracy even though it can switch at any moment. The 17th is an opportunity to remember this, in order to not repeat the mistakes of the past.

“And we aren’t just looking back, but also towards the future which is what our Concert for the Future represents – the future of the Czech Republic.”

JV: You mentioned the importance of not forgetting the students in 1939, students like Jan Opletal who was shot and nine students who were executed by the Nazis on November 17, 1939. And it was students again in 1989, marking the day, in what would become the spark that began the Velvet Revolution.

But we are living in somewhat politically turbulent times and a few years ago there was kind of co-opting of the holiday by some politicians, most notably those with an anti-migrant stance. Did that provoke an impulse to “take the holiday back”, if I can put it in those terms?

“I think there was a motivation from that but it was not the primary one. For example, as Nerudný Fest we got into organising the Concert for the Future by accident to be honest.

“On the other hand, I remember the feeling that year, when a platform was given to extremists and that was very bad. There was nothing coordinated on the streets of Prague for example. So when we began coordinating the Festival of Freedom, we wanted to offer people many different possibilities to celebrate this day. It was important to agree and bring together different democratic initiatives and we were brought together by a common purpose.” 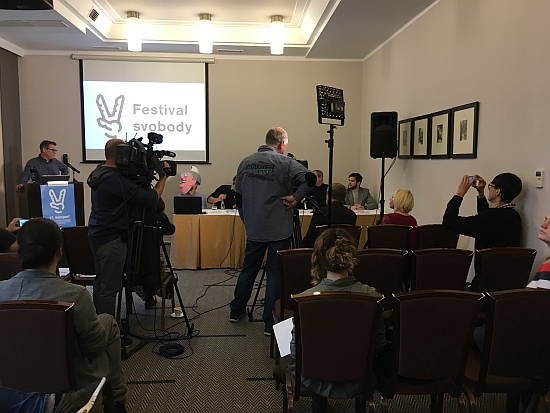 Fellow organiser Michal Zima says there is no doubt in his mind that 2015 had an impact:

“It is because of that day and still it reminded us that freedom is not guaranteed or free. Paradoxically that day brought us even more together, so that we started something new.”

The festival’s Concert for the Future will be one of the big events on Saturday evening, bringing together bands and numerous celebrities who say November 17 needs to be marked but also simply celebrated and especially, enjoyed.

Actress Tereza Voříšková, well known in both domestic and foreign productions (Grapes, The Missing), who is also involved in the festival, told attendees in Prague she was only six months old in the heady days of the revolution, but that its significance was not lost on her - or others of her generation.

“I asked my mum what we were doing on November 17, and she said I was in the stroller on the balcony, sleeping. She was sitting by the window wondering ‘Is this it?’ And it was.

“But she was worried. My father was a soldier, so there was a fear about which way things would go. So she was praying and it turned out the 17th was it. I was only being breast-fed at the time, [but after I grew up] I of course learned how important it is. Freedom is the most important thing for us. It is very hard to imagine what it was like to live without it.”

The Velvet Carnival: An Unconventional Way of Commemorating November 17

This Saturday, a wide range of commemorative events will be taking place throughout the Czech Republic to mark the anniversary of the 1989 Velvet Revolution. But a far cry from traditional wreath laying and solemn ceremonies will be the Velvet Carnival - a masked, satirical parade, offering a distinct alternative to celebrate the freedoms acquired following the Velvet Revolution which began on November 17, 1989. 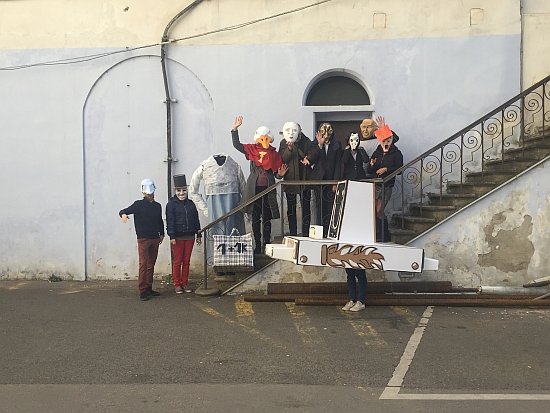 Now in its 7th year, the Velvet Carnival (organised by Iniciativa FOR_UM) aims to act both as a reflection of the sense of liberty that developed in the wake the 1989 Revolution and as an opportunity to critically comment on political and civic events that occurred in contemporary society since - in a joyous and satirical manner.

The carnival comprises of 150-450 active participants annually and this year will include up to 14 initiatives. Those involved in the parade include NGOs, civic groups, artists and students, representing social and political issues through colourful and dramatic masks, allegorical constructions and satirical pamphlets.

This year the participating groups, which include Greenpeace, KC Zinta 35 and Múzy Dětem, offer a lampooning analysis of pressing issues from social housing provision to pollution to growing nationalism and populist trends.

The inspiration for the Velvet Carnival comes from the traditional Basel festival of Fasnacht, an event that takes place over three days and nights between February and March each year.

Basler Fasnacht is an annual display of how Swiss society processes its current situation in a way that is both critical and visual. While at a much smaller scale than its Swiss counterpart, the Velvet Carnival provides a similar opportunity to artists and activists alike.

This year the carnival’s main coordinator, Olga Cieslarová, points to collaboration between the two events and the parade’s growing multinational nature, “A new aspect of this year is the Swiss cooperation and German cooperation in the festival,” she said on Wednesday, whereby a group of Swiss and German high school students will participate in the Velvet Parade in collaboration with students from Prague after weeklong workshops, “Which is interesting in the context of education and getting to know the real city of Prague”.

The Velvet Carnival has evolved and grown since its debut in 2001, and its organisers hope that the combined use of creativity, jest and satire will serve to reanimate the way events of the Velvet Revolution are re-examined, interpreted and understood.

This year’s Velvet Carnival will begin with a ceremonial opening at Prague’s Naměstí republiky at 1 pm on the 17th of November, where a slam poetry performance by Anatol Svahilec will take place. From there, the masked procession will travel to the Old Town Square (Staroměstské náměstí) then on to Charles Bridge to Maltese Square, through Kampa Park before eventually looping back, passing over the Legion Bridge towards Národní třída (National Street) by around 5 pm.

The parade will make its return to Náměstí republiky for the ceremonial closing where a ‘fire show’ by Tribo Fuego will wrap up this year’s festivities by 6 pm.

Be sure to consult the program and festival site for details. Information in English: