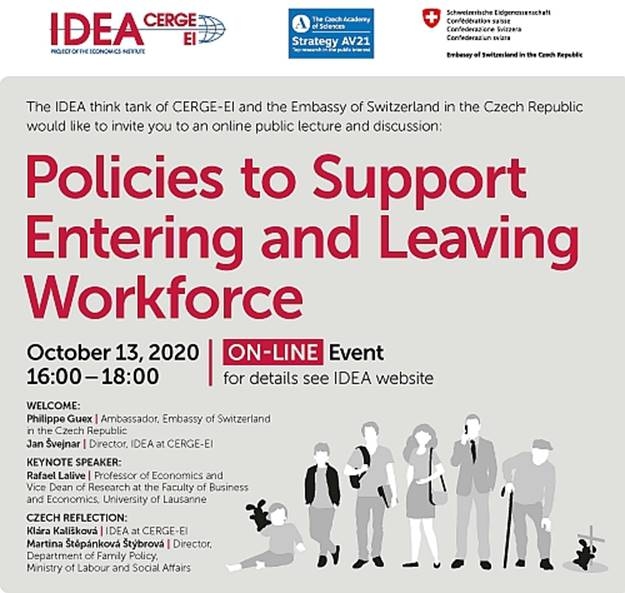 Much of the focus of IDEA, a think-tank of the Economics Institute of the Czech Academy of Sciences, which is part of CERGE-EI (a joint workplace with Charles University), is tied this year to the novel coronavirus, and anti-Covid measures. However, that is far from its only activity: this week the think tank hosted an online event examining the influence of public policy on labour markets, featuring a keynote presentation by University of Lausanne professor of Economics Rafael Lalive. The online meeting was organised in conjunction with the Swiss Embassy in Prague.

Lalive discussed how employee life-cycles, especially moments such as the birth of a child or coming retirement, are affected by public policy. As an economist and researcher Lalive has looked extensively into at the ways policies, on everything from maternity to parental leave to pensions and social security, affect families and individuals. That includes uncovering deeper causal effects: one example given was how the automatic renewal of eligibility for support boosted decisions by spouses to have a second child, sooner, rather than putting it off. Such decisions ultimately affect the birth rate, employment numbers, the burden on the social security system, length of leave, employer contribution and more.

As is well-documented, parents who take leave – most often mothers – effectively put their career on hold in favour of bringing up a child. But returning to the labour market often proves daunting, even in cases where this is greater state or private employer support.

Public policy also rests on the bedrock of cultural tradition, varying markedly across different countries for historic reasons. In his presentation on Tuesday, Lalive began by discussing the German tradition and changes introduced in the 19th century by Otto von Bismarck.

“Bismarck was a very 'un-German' German. He was behind the start of the first social insurance in which everyone paid into a pot, with benefits for everyone. It is really socialised insurance. Prior to Bismarck, this insurance was provided within the family – that was the traditional German approach. The family was responsible. Gender roles were well-defined and women worked until the first child was born and then they basically stopped. That was a cultural tradition that was shared by German-speaking areas that continues even into German-speaking areas of Switzerland.” 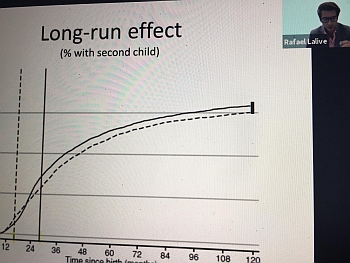 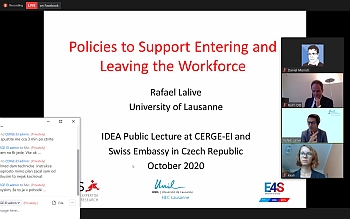 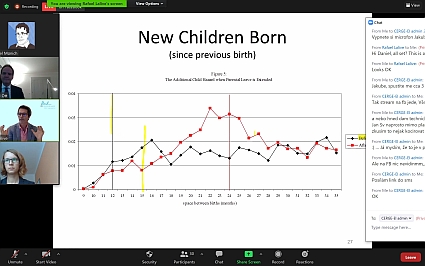 Today, the debate over whether the individual or the state should shoulder the financial and organisational burden at key moments in peoples’ lives, such as the birth of a child or retirement, remains spirited and a fairly strong divide between progressives and conservatives. The question remains whether care for children or the elderly, falls more on families and the individual or more on the welfare state. Rafael Lalive again:

“There is huge opposition from conservatives in Switzerland, for example, to expanding child care. In the past, the first schooling laws outlined you went to primary school and later kindergartens gradually became compulsory. Today the discussion is at the level of childcare or day care. And whenever there is discussion of this, for example in Switzerland, the reaction is ‘ok, we don’t want the state becoming even more involved or interfering in our lives.’ And I think it is a justified reaction. Because we are coming from a situation where the family used to be ‘everything’ to one where the state is more and more involved. While it allows us to become more individualistic, we also realise that there is less and less that we can control in our own family lives. And that’s a source of tension.”

“The point I would like to make is that we all think about the same questions, as nations, very differently. One of the statements I look at in the talk covers traditional gender roles: it’s ‘men should work outside the household and women should work at home’. It’s one statement and we go from no one saying such a statement is right in Sweden, to 30 or 40 percent in Armenia saying it’s correct. So questions such as ‘who should provide for us?’ ‘Is it up to the individual or the state?’ vary. Some systems are going to be more broad or extensive, others more limited.

“If you ask me personally, I think the world is moving more towards systems that allow us, as individuals, to live as freely as we can. And those are systems that we find in the north of Europe. If you take Sweden, you have quite a short parental leave but you also have universal child care. Pensions? When you want to stop, you do it. Nobody says you have to work to 65 or 70. The culture we live in frames the kind of social framework we create.”

Even in the time of Covid-19, differences in how public issues, public policy and government mandates (in this case in public health) have been marked. Once again, Sweden is a case in point, not setting down hard-set rules or bans during the pandemic but leaving the responsibility largely with individuals:

“It fits. You can never tell anyone else in Sweden what they have to do!”