One topic that is closely followed by ecologists is the spontaneous spread of non-native species in the countryside. Amongst the most well-known of these in the Czech Republic is the black locust tree or bush, which in some areas creates unbroken, impenetrable ‘forests’, destroying the original vegetation. Dr. Jiří Reif and his team from the CU Faculty of Science are currently starting a new study which aims to clarify the effect that invasive plants have on birdlife in the Czech Republic. 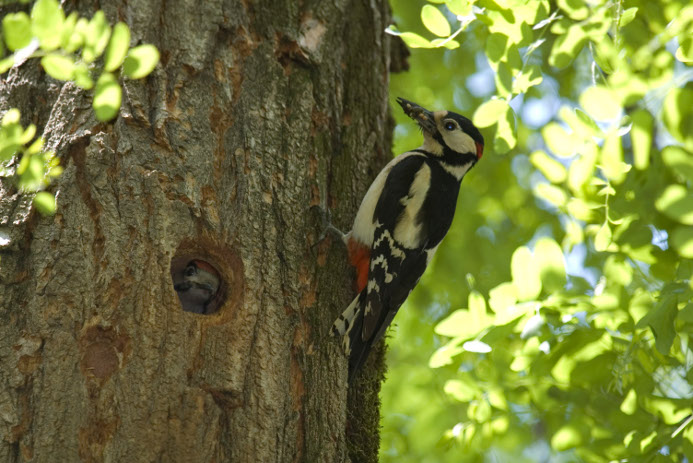 Which plants, in view of your scientific focus, are of greatest interest to you?

Birds essentially don’t mind if there is just a single non-native tree in the middle of a forest. We will therefore concentrate on plants that create continuous growth, one of which is the black locust. We are also considering including the Weymouth pine, which is widespread in the Czech Switzerland area; however, major steps have been taken to limit the tree and its growth levels have been significantly reduced. Widespread in the Křivoklát area is the northern red oak; however this species does not, compared to the black locust, create such large, continuous growths. As far as the oak is concerned we will therefore try to determine how high a percentage of this tree species in a forest can change the species make-up of birdlife in the given locality. We will compare growths of black locust with the original oak forests. Invasive herbs do not appear to have a great influence on birdlife.

I have read that the black locust has toxic effects on plants in its vicinity (except for some species), and it is therefore unsafe for native species, which it destroys. How does this affect birdlife?

While the more in-depth research is still to come, we already have a certain, preliminary idea of the effect growths of black locust have on birds. Typical for this type of plant is a well-developed bush phase, which houses primarily undemanding bird species – e.g. the Eurasian blackcap – and birds common on the outskirts of towns. Species that are less restricted in ecological terms can generally tolerate the black locust more. On the other hand, species dependent on hollows and ecological specialists, such as the middle spotted woodpecker, are disappearing.

What form does the actual measuring and monitoring process take?

We want to study the effect invasive plant species have on birdlife. We will focus primarily on the nesting season, when birds reproduce and stay in one place. We will mark out certain areas measuring approximately 100 x100 metres, corresponding to the territory of small songbirds such as the chaffinch, thrush, warbler, robin and tit. We will count the number of birds in these areas, chiefly focusing on the males, which mark out their territory with song. One male usually means one pair nesting at a particular location. We carry out several counts to ensure that we have precise data. Based on this data we will estimate the number of species in defined areas and create models of the various ecological relationships that interest us.

The study will also include an entomological survey. We will install a light trap at certain locations to catch insects to help us determine how much food there is for birds. Our starting thesis is that, the lower the amount of food, the lower the number of bird species present. We will then also attempt to verify the predatory pressure in growths of invasive plants. We will create artificial nests in which we will then place eggs of the Japanese quail, distribute them around several locations and then check them after a period corresponding to the time the birds take care of the nest. The number of eggs remaining will then be used to assess the predatory pressure in plant growths.

How will you monitor non-songbirds?

For example, while woodpeckers don’t sing, they do make noises. Their chief means of marking their territory is ‘drumming’, i.e. they perch on a branch, preferably a dry one, on which they then tap their beak. Every species has a slightly different way of drumming that can be used to distinguish between them.

Is there a chance that some species will disappear entirely from the Czech landscape due to the effects of spreading growths of non-native plants?

Theoretically yes, but there’s no risk of that at the present time. We haven’t heard of any species being acutely threatened. In the medium term there could be a reduction in population, but not total extinction. It’s the same as if, for example, a meadow was turned into a field: this would mean a fatal change for many species; however, if such a change was not on a large scale, species would not disappear, and the new conditions could suit some of them. I read a study from Poland, where goldenrod, an invasive species, spreads on abandoned meadows, changing the vegetation structure in such a way that, while few species survive in it, it suits one specific species – the march warbler.

Could new plant growths, on the other hand, attract non-native bird species to the Czech Republic?

Not completely, but my colleagues from Palacký University in Olomouc have found that Eurasian blackcaps like black locusts, even though they lose a lot of broods there. It’s a kind of ecological trap for them.

Some bird species that do not have so many ecological limitations and which are, furthermore, tolerant and clever, are now moving into towns. These species have large brains and are capable of discovering new opportunities. These include, for example, tits and jays. It is therefore possible that we will discover in new plant growths species that occur more frequently in towns. I don’t, however, expect to encounter any species new to the Czech Republic.

Do you agree with the targeted destruction of invasive plants in the countryside?

That’s a difficult question that I can’t give an entirely simple answer to. It’s definitely appropriate to intervene in cases where such growths could cause major changes to the environment and where intervention is also technically feasible. That’s what happened in the case of the Weymouth pine in Czech Switzerland, where its destruction was both justified and successful.

However, we probably won’t be able to totally eliminate the black locust. The struggle against this species is justified in places that are valuable, for example the Podyjí National Park. However, if black locusts are growing on top of a hill that would otherwise be covered by a species-thin (even if native) forest, and where no-one minds it, there’s no reason to get rid of it.

The approach to be taken is dependent on the local context, so can’t just make a blanket statement that non-native species must be combated. It would, however, be good to consider their reduction from the point of view of overall priorities for environmental protection.