Visit of the Ambassador of Azerbaijan to CU

Charles University maintains its excellent reputation as one of Europe’s most exciting institutions for international and Erasmus students – for Thursday, the 20th of November, was an incredible evening enriched with knowledge and culture on the topic of Azerbaijan. 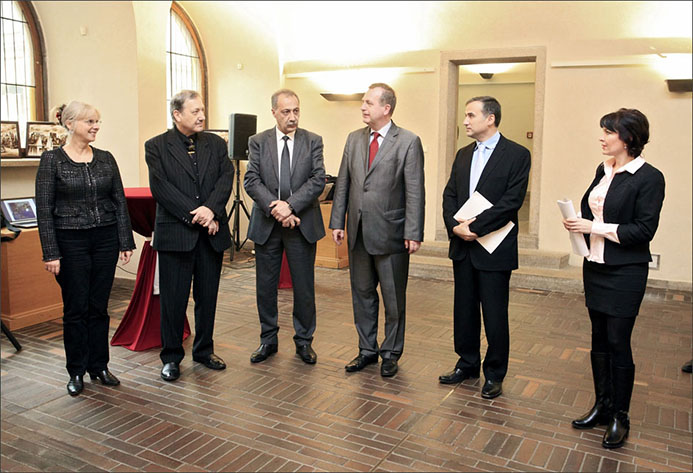 A cold autumn night did not deter students and members of the local academic community away, as the events organized by Charles University, in this case the Faculty of Arts, are forever beautifully prepared. Dozens of budding students arrived with anticipation of expanding their knowledge and ultimately widening their circle of friends – and this lecture certainly delivered that.

Carried by His Excellency Mr. J. E. Farid Shafiyev, the Ambassador of the Republic of Azerbaijan to the Czech Republic, this lecture delved into the thrilling, and quite unfamiliar history of Azerbaijan – one of the post-Soviet states in the Caucasian region. Did you know, for example, that Azerbaijan was the first modern parliamentarian Islamic Republic – prior to World War I? The Azerbaijan Democratic Republic proclaimed its independence in 1918 as the first Muslim-majority democratic and secular republic, following the collapse of the Russian Empire in 1917 and a brief existence of the Transcaucasian Democratic Federative Republic, which had joined Azerbaijan with Georgia and Armenia into one state in the period February to May 1918. The Azerbaijan Democratic Republic was also the first Muslim-majority country to have operas, theatres and modern universities. The independency of the state, lost to Soviet Union on April 28, 1920, was reestablished in October 18, 1991.

Although brief, Mr Shafiyev’s  overview of Azerbaijani history encompassed the essential milestones over the past few centuries, and thus sparked a fuse for an interesting intellectual debate during the question and answer session.

“I have a recent interest in the history of Czechoslovakia.” Mr Shafiyev began by telling his surge to success, from the very routes of his career, stemming from his impressive academic and educational achievements at Baku State University (established 1919) – up until now, where he maintains a strong interest in History.

Truly captivating! There was complete and utter silence from the audience as Mr Shafiyev tells a wonderful tale of Azerbaijani origins, and past and present relations with Russia and Armenia which left people in deep thought, and thus proved to be a favourite topic during the debate.

The informal and relaxed approach to this lecture was truly a delight; Mr Shafiyev would continue to bewilder guests with his personal experiences as a child growing up alongside the Soviet regime – this proved to legitimize his knowledge and thus further engrossed the guests.

In a flash the evening drew to a close. What followed the lecture was an array of delightful complementary tastes of Azerbaijani culture. It was an incredible opportunity to talk to academic experts, and first hand witnesses to life and connections to Azerbaijani history and culture – whilst eating plenty of cakes and drinking hot tea. Be sure not to miss out on another spectacular evening, who knows, it may spark a vast new area of interest – give it a try and come along!