Visit of the US Ambassador at Charles University

On November 15th, 2016, United States Ambassador to the Czech Republic Mr. Andrew Schapiro gave a lecture to a packed hall of students in the Charles University Law Building. The impressive turnout for the event was somewhat unsurprising, given that the main focus of the Ambassador's lecture was the recent US Presidential election. Mr. Schapiro's attitude to the outcome of the election was, purportedly, one of hope and collaborative spirit: while admitting that he himself landed on the Democrat side of the American political fence, and was thus hoping for a different outcome, the Ambassador emphasised the need for everyone in the American political system to assist and collaborate with Donald Trump, so that America may remain a "beacon of freedom and democracy" for the world.

Mr. Schapiro presented accepting and supporting President Trump as the only truly democratic option, in keeping with the will of the electoral majority. Although this stance is one that many observers have taken, it is not immune to criticism. In short, what the Ambassador and others like him are suggesting is a normalisation of Donald Trump's presidency: while basically turning a blind eye to troubling issues within the Republican candidate's campaign, they place faith in the checks and balances that exist to prevent, for example, an unpredictable President from causing an excessive shock to the system and destabilising the status quo.

Herein lies the crux of the issue: the position outlined by Mr. Schapiro is conservative, immobile: things as they are seem suitable enough, and gradual change is expected to bring about improvement for all. However, the mere existence of a President-elect Trump is a strong signal that the status quo model may be reaching a breaking point. Large swathes of the population believe the current system is completely out of touch with their needs: they see Washington as a swamp of corruption and greed, filled with power-hungry politicians who are deep in the pockets of lobbyists and corporate backers. 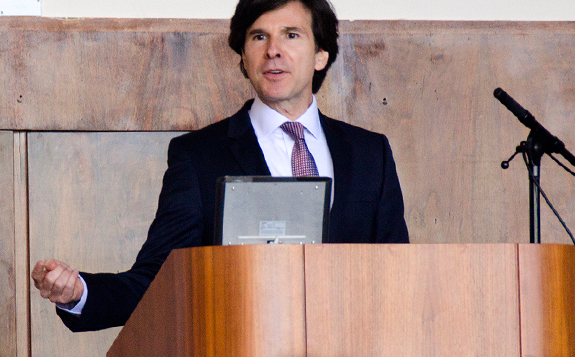 During the primaries the dissatisfaction with the establishment found, among left-leaning voters, its champion in Bernie Sanders, a progressive with a quasi-socialist political background (almost unheard of on the centre-stage of US politics) who for much of his political career was unaligned with either major party. However, the Democratic Party put its weight behind a candidate that, in the establishment’s view, was a surefire winner. Sanders, seen by many as possibly too old, and certainly too idealistic to be a “strong” candidate, lost the race with Hillary Clinton, who in early summer seemed set to coast all the way to the Oval Office.

Despite her troubles with the private email server, Clinton was highly experienced in politics and diplomacy, while also being the first female presidential candidate, all of which made the Party establishment believe that nothing could stand in her way. Meanwhile, the Republican Party seemed to be imploding, courtesy of the “Trump phenomena” (as the new leader of the free world has labeled his campaign).

During the primaries, the field of 17 candidates was slowly whittled down, and while observers were entertained, amused, and at times disgusted by Donald Trump’s unique campaign and controversial statements, no one believed he would ever win the nomination. Until he did. Throughout the summer, Trump’s attitude didn’t change: he didn’t stop making offensive and hazardous statements (of which many played with the boundaries of reality), he never sought to appear presidential, nor did he put forward any kind of meaningful policy plan, building his campaign around three slogans: build a wall, lock her up, drain the swamp.

Xenophobia drove the first promise, and, though Hillary Clinton might have done better to put it a little less bluntly, a significant number of Trump supporters do respond passionately to a xenophobic, racist message, and thus his popular support was strengthened. The second promise was of a petty personal vendetta against his opponent, suggesting the deployment of a prosecutor dedicated to putting Clinton behind bars for her “crookedness”.

Hillary Clinton’s guilt in the email case, however, was never really significant to the Trump campaign: Crooked Hillary was crooked because, like so many others, she’d been in Washington for decades, making shady deals and not truly working for the people. With this same distaste for careerist politics lies the fundamental importance of “drain the swamp”: Trump could use this promise successfully because he was a newcomer to politics, and could thus claim that he would give Washington a breath of fresh air, cleansing it of the corruption that left his supporters so disenchanted. In every election in the past, lack of political and diplomatic experience was an insurmountable obstacle to candidates, but in 2016 Trump rode a wave of anti-establishment feeling that nullified the significance of his inexperience, and basically allowed him to say and do whatever he wanted.

On November 15th, 2016, the Oxford English Dictionary revealed its word of the year: post-truth; though still quite uncommon, it is of great use in analyzing the ‘Trump phenomena’. Adam Curtis, the English documentary film maker, released his most recent work in October 2016, a feature titled Hypernormalisation: in it, he suggests that we are living in a post-truth world, where the political, social and economic system that purported to be able to provide prosperity and stability to everyone (in the long run) is beginning to show its cracks. The intertitles in one of the trailers for the documentary perfectly sum up Curtis’s position: “We live in a world where the powerful deceive us. We know they lie. They know we know they lie. They don’t care. We say we care, but we do nothing. And nothing ever changes.”

In the documentary itself, Curtis examines the creation of this post-truth world throughout the past fifty years, and suggests that politics in many parts of the world is undergoing a fundamental change. He gives the example of the impact on Russian politics of Vladislav Surkov, who as an advisor to Putin has created a mode of political activity whereby the ruling powers engage in seemingly random or contradictory action, without giving any real explanation of their motive. Thus the opposition is left in confusion and doubt, unable to act successfully. Peter Pomerantsev has described the stage of Russian politics as “postmodernist theatre”, and Adam Curtis is not the only one to see a connection between Surkov’s manipulation of reality and certain aspects of Donald Trump’s campaign.

In recent years, it has become apparent that members of the public experience news and politics within their own personal bubble. By acquiring information through social media and search engines, operated by algorithms designed to give each individual user exactly what he or she likes and wants to see, we are closing ourselves off from what many people in our democracies are thinking, simply because they do not think like us. The ground for debate is being eroded. Donald Trump realized this, and took advantage of it. By speaking in straightforward terms, detailing simple narratives of the moral struggle between right and wrong, Trump appealed to the heartstrings of many Americans, and thus negated the importance of reasoned, rational debate. Thus his opponents, and the media, used to a completely different dynamic of political action, were helpless to intervene, and while they scornfully mocked Trump the power of their words had disappeared. It didn’t matter if Trump made offensive statements, or even if he seemed to manipulate the truth: the post-truth electorate would have its victory.

Along with discussing the election, Ambassador Schapiro talked about the future of US-Czech relations, emphasizing the importance of continued economic, military and diplomatic cooperation between the Czech Republic and the United States. While stressing how he did not intend to sound condescending, Mr. Schapiro explained how it is still America’s duty, as the leader of the free world, to assist and counsel nations in Central Europe so that they might progress and become strong enough to resist “dangerous” Russia.

The Ambassador seemed confident that America remains a powerful force for good in the world, whose mission should be to spread freedom and democracy to the farthest corners of the globe. The events of the past few months, however, suggest that the time may have come for the United States to take a step back and address the issues of structural inequality that plague its own political, social and economic systems. America, in the 20th century, worked hard to spread (and often impose) its system of beliefs on nations all around the world; now, in 2016, that same system is showing serious, deeply ingrained flaws, and perhaps it is time for US diplomats to start to question whether their country is indeed a beacon the whole world should follow.

Donald Trump’s win is a revolution in a system where revolution seemed impossible, a revolt against appeasement and condescension from the powerful, and many believe we are on the cusp of some kind of paradigm shift at the core of our political systems. Brexit seems to have been driven by the same forces as Trump’s win, much like the rise of populist, alt-right movements in the rest of Europe. Michael Gove, before the referendum in the UK, infamously claimed that “Britain has had enough of experts”; he may have understood that the reign of fact and truth seems to be coming to an end. In this post-truth world the consequences of the events of 2016, much like the Trump presidency itself, are nigh impossible to predict.

The slope of nationalist and populist rhetoric is a slippery one, and our treatment of immigrants and refugees bears a worrying resemblance to the de-humanisation the Jews suffered in 1920s and 1930s Europe. In England, America’s little sister, they called immigrants “cockroaches”. Perhaps drawing comparisons with pre-World War II totalitarian regimes is premature, or uncalled for, but the rise of racism, sexism, xenophobia and isolationism we are witnessing all over the world should never be something to underestimate.