A bright Wednesday afternoon in Jinonice campus of CU welcomed the Head of Diplomatic Affairs between the Czech Republic and Italy, His Excellency Pasquale D’Avino for a topical lecture on European immigration. Loudly greeting the people with a warm “Buon giorno, Dobrý den!”, Mr. D’Avino entered a room full of interested social science academics and guests. The flamboyant character addressed all present intimately and diverged into serious subject matters in relation to immigration flows to Europe through the Mediterranean. 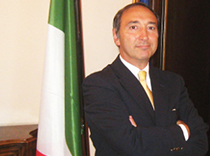 Clearly enthusiastic about the Czech Republic, he showed his appreciation and honour to be lecturing at such a prestigious university. Mr. D’Avino gave a brief introduction of his experience, then offered his admiration, saying that he was “happy to be with young people, who will run this country one day”, a rather flattering reception from an infectious character.

Wearing his tireless smile and royal blue suit, Mr. D’Avino emphasised that Italy was unfortunately a nation “victimised by stereotypes”, and explained these cultural trends, both positive and negative. Aside from the stereotypical labels attached to Italy, such as “Al Capone” and the country's creation of “wonderful food”, Mr. D’Avino sobered his jovial tone and elaborated on the great role which Italy has played in the World's development. Italian contributions to science in particular were emphasised, with examples such as the radio waves and nuclear reactors just a few of their attainments. According to the Ambassador “Italy is not just a vibrant cultural country but also a member of the G20, the second largest industrial country in Europe with over six million active companies and a leading force in high tech industry. The subject matter quickly shifted to the positives of the Czech Republic, as an up and coming economic power, ending his sentence with praise, saying “you are lucky to be a part of such a lovely country” in the most complimentary way possible.

Emphasising the marvellous stability and growth of the Czech Republic since its democratic foundation; the freedom and liberty in these lands accorded to its citizens, in comparison to many of the Slavonic people, is of a great standard. Using an unspecified example, Mr. D’Avino said “just a few hundred kilometres east, there are Slavonic people with few journalistic or opposition rights”, stressing on the excellence of Czech political stability in the twenty first century.

Mr. D’Avino then linked this into a more pan-European perspective. With great delight, he exclaimed that in comparison Europe is “far more civilized” when compared with other continents, being the only region without the death penalty. As well as this, we have a “very special and very civilized European Union” which valuably connects the nations. Originally created to end disunity, the Italian ambassador praised the achievements of the European Union, as not just a means of European integration, but also to “build up human rights and respect for minorities” as a supranational entity. Referring to the multicultural melting pot of the European Union, Mr. D’Avino highlighted the integral inclusion of not only the Slavonic family into the union, but also now the Balkan family in this decade, as a modern vision of cooperative unity. As a result of this we now have “two big frontiers, Eastern and Southern Mediterranean” as doorways for immigration and multiculturalism. He made it clear that these “different cultures deserve respect because they have problems”, as many of these people take unreliable means of transport to get to migrate to Europe. “We must care for these people”, he stressed.

As a question of values, the Italian representative passionately alerted the people that “we have stopped crusades, stopped world wars, now we must care for the people” in reference to European Union donations of aid and safety vessels to combat this growing risk to human life due to unsafe migration.

Stopping abruptly, Mr. D’Avino spoke of the problems with this process, but also highlighting the importance of retaining European values. The spread of illiberal governance and unstable leadership are aspects which Europe must not be influenced by. Such examples given were the results of the Arab Spring due to the unstable political environment, which have resulted in “the Arab world, turned upside down”. This led to a completely new stream of debate, with his fear towards radical Islam and his experiences towards it. Speaking of a personal anecdote, Mr. D’Avino told the crowd of his experiences of living for four years in the Sharia run, Saudi Arabia, concluding with the statement “extremist Islam is wrong”. The European Union needs to retain its democracy and human rights, was the message offered.

Speaking of the historic roots of Europe, D’Avino said that both “Palermo and Granada were once Islamic”, praising the cities development with diverse origins. And now, this diversity has taken a new shape, and allowed Italian people to further themselves educationally, with filling menial jobs far less of an issue. His point was finalised after a short break to clear his throat, “immigration is good, it helps cities”, indicating that if immigration is absorbed and integrated into society, the settlements of the Eastern frontier will flourish.

With further emphasis on the relationship between Italy and the Czech Republic, the diplomatic connector of these nations, Mr. D’Avino concluded his speech saying, “I was impressed to see the story of our trade relations – communism is over, we (Italy) could export wine to them (Czech Republic), but they are beer drinkers! And it is the best, you’ll find Gambrinus in Rome!” followed by an outcry of laughter due to the humour and charisma of the diplomat.

This summed up the fantastic relationship between the two countries, with such mutual cultural respect and flourishing tourism in both directions. It was clear from Mr. D’Avino’s expression that he was a great admirer of the Czech Republic and its culture. A laid back yet informative speech given to a room of intent and cheerful students, the focus was on the connection between the countries and the challenges which both must combat together.