On Tuesday, May 27, Helena Hradilová from the Erasmus Club of the Faculty of Arts of CU received the annual European Charlemagne Youth Prize for Czech Republic for a common project of the Press Department of CU, European Office of CU and the Erasmus Club of the Faculty of Arts, International iForum. This project enables the international students of Charles University, in particular those of coming to CU with the Erasmus programme, to gain journalistic and editing experience in the English issue of the university magazine iForum. 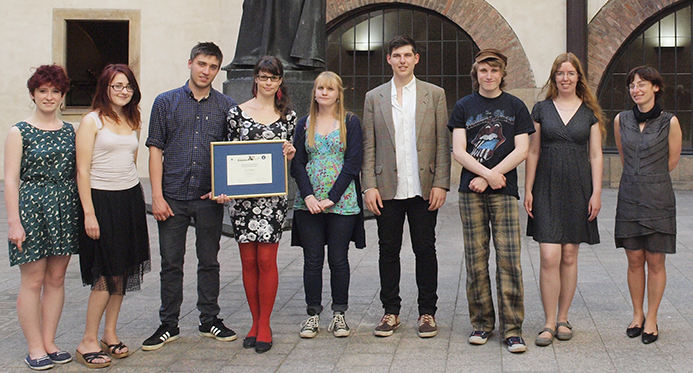 All twenty-eight countries from the EU took part in the competition and 370 projects were contributed by its young participants; one national winner was selected for each of the countries. A representative of this project was invited to the official award ceremony in the German city of Aachen, where the prestigious European political Charlemagne Prize was also awarded in the same time. The 28 reps of the youth projects were invited to join the audience of this award ceremony as well. The annual holder of the Charlemagne Prize is Herman Van Rompuy, a Belgian politician of Flemish origin, who is the first full-time President of the European Council (since 2009). In the past, the prize was awarded e.g. to Konrad Adenauer (1954), Winston Churchill (1956) or Bill Clinton (2000). The only Czech holder of this prize has so far been Václav Havel, awarded in 1991.

The European Charlemagne Youth Prize has been awarded since the year 2008 and it is a common initiative of the European Parliament and the Association for the Award of the International Charlemagne Prize. It recognises contributions by young people towards the process of European integration.

Charles University in Prague was also the winner of the Czech national European Charlemagne Youth Prize in the year 2012. At this time, the Europe Meets School programme of the Erasmus Club of the Faculty of Arts was acknowledged by it. It also won the 2nd European place in the competition.

This year’s best ECYP projects on the European level were the Danish project Our Europe, Dutch JouwDelft & Co and Cyprian Employment4U. The first of the projects deals with the international understanding of the young generation in the frame of Europe. The second and third projects concentrated on the fight against unemployment of the old continent’s young population. The increase of unemployment in recent years has also been one of the main motivations of Erasmus students wanting to join the various exchange studies accompanying internships such as the one offered by the news bureau of the iForum journal.