As an Erasmus student from the UK studying in Prague, I have always been curious about what clubs and societies are available to join and take part in at Charles University. So when I was told that Charles University had its own theatre company called Shakespeare Production (also known as Charles University Workshop Production), I was desperate to find out more. I met up with Teata Binar, a member of the theatre team, and she told me all about the company which has been up and running since 1993. Teata was also kind enough to invite me to their production of How I Learned to Drive by Paula Vogel. I thoroughly enjoyed viewing the play, and would like to thank Teata again for inviting me. 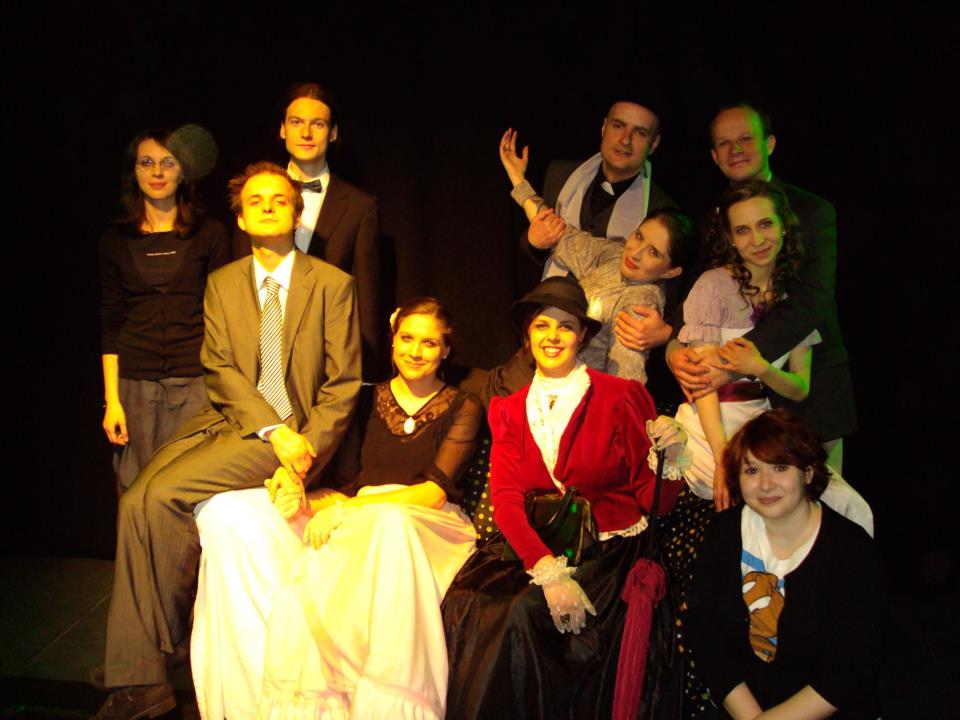 From interviewing Teata and seeing the actors and some of the members of the production team in action, it was clear immediately how enthusiastic each member was, and how much they enjoyed being part of the society. They interact with each other as if they are part of a big family, and speak about their director and creator of Shakespeare Production, John Martlew, with the upmost respect and admiration. Unfortunately John is back in England at the moment so I did not get a chance to meet, but I was lucky enough to be get a sneak preview of his birthday present from the members of Shakespeare Production, which I imagine he will love!

Teata, how and when did Shakespeare Production start?

The Shakespeare Production was formed in 1993 within the Department of English and American Studies at the Faculty of Arts at Charles University, by the then professor/lecturer John Martlew. John was teaching Shakespeare in one of his classes when one student asked why the class is only talking about the play, when they could act it, which, after all was the intention of Shakespeare when writing his works. This sparked an idea in John’s head and expanded he went on to form this successful society at the University. Today Shakespeare Production is an established theatre company, and each year John goes around lectures, especially lectures and seminars on Shakespeare and other classic literary playwrights to promote the company and entice new students to join and try it out, with some going on to be cast in the upcoming play in the Autumn.

So far, we have performed a total of 13 plays. Our first performance was Shakespeare’s A Midsummer Night’s Dream in the Salesiánské Theatre in the spring of 1996. Further plays followed: Twelfth Night (2000), Much Ado about Nothing (2001, Řetízek Theatre), Troilus and Cressida (2003, NoD Roxy), As You Like It (2004, Salesiánské Theatre) and Pericles (2006, Salesiánské Theatre). We performed The Merry Wives of Windsor in 2007 in the Na Prádle Theatre which has become our permanent stage.

I am curious as to why you picked the name ‘Shakespeare Production’ for your theatre group as you perform plays by other playwrights?

The Shakespeare Production Company started off just performing Shakespeare plays, hence the name. It is primarily intended for students studying English to familiarise themselves with Shakespeare and his language as well as the context of the Elizabethan stage. Today, as the company has already ran for many years, there are a number of actors who have already participated in several plays who would like to carry on performing although they have finished their. Therefore, John provided the opportunity to the older and more experienced actors to continue acting since they were motivated, but doing plays by playwrights that they proposed. Thus, the initiative came from the actors themselves and John encouraged and supported them in it. This was the case with Oscar Wilde’s The Importance of Being Earnest and How I Learned to Drive by Paula Vogel.

How many students participate?

The number of members involved in the Shakespeare Production varies from year to year. We never have a fixed number of actors until the rehearsals themselves, which will be in autumn. It always depends on the play, the casting and how many people show interest in participating. For the coming autumn production of The Tempest, John will arrive next week and we´re going to have a read-through on Friday. From that read-through we´ll see how many people come and want to be involved, but in general, we are always around 20 members. In the spring of 2009, our director John Martlew decided to act on the increase in the number of members in our acting ensemble and accepted the challenge of putting on two plays in one season, these being: A Great Tragedy of Antony and Cleopatra and a more modest piece, The Comedy of Errors. So as you can see it differs each year.

Are the participants just from the Faculty of Arts?

We are all volunteers, who love the theatre. There are also people from different faculties sometimes but we are based in the English and American Studies department at the Faculty of Arts.

How do you and your colleagues prepare for a production?

After the play is chosen and casting complete, the participants spend around 2 months rehearsing. At the end of the rehearsal period, we have from two to five performances in one or two weeks. As we are all volunteers it is sometimes hard to arrange a time when we can all meet and prepare our production of the play, as we all have other jobs and some of us classes to attend. For example I am currently studying for my second masters and also have a job teaching French. So as you can imagine it is sometimes difficult to find the time, but we all try to manage as we all enjoy it so much!

What are your tasks as a member of the production team?

Our tasks vary a lot. Our members are actively involved in all theatre activities, including organisation, costume and properties design and prompting. From example I am planning to have a tiny part in The Tempest (our next production in the autumn 2013) but for our most recent play How I Learned to Drive my job was prompter. I hope one day to be able to direct a play. I love that our jobs can vary so much from play to play, it keeps it interesting, and it also helps educate us on what goes on behind the scenes.

How do you finance the Shakespeare Theatre Company?

The Faculty of the Arts generously donate some money each year to the production company, as do some members of the crew, and of course we use the money we make from selling tickets for each of our play productions. 90% of the expenses are theatre rental charges.

I would like to thank Teata again for her time, and the whole team behind Shakespeare Production. I thoroughly enjoyed your production of How I Learned to Drive, and only wish I could stay longer in Prague to see The Tempest in the autumn!