Charles University remembered Dr. Aleš Hrdlička, one of the founding fathers of Czech and American Anthropology and the founder of the Museum of Anthropology in Prague, on the 17th October with a commemorative lecture. The lecture was delivered by Prof. Jane Buikstra from Arizona State University who is well respected in her field of Bioarchaeology and was part of workshop „Building of Czechoslovakian Anthropology“ (Budování československé antropologie) held on 17th and 18th October 2013.

The first part of the lecture looked at Hrdlička's career. Hrdlička was born in Humpolec in Bohemia (back then part of Austria-Hungary) in 1869. In 1881 he emigrated with his parents to the USA. There he became a medical student in 1889 at the Eclectic Medical College, later moving to Homoeopathic College in New York. These years were particularly formative for Hrdlička as he became interested in Anthropology, being influenced by the work of Samuel Morton (1799-1851) who was interested in Natural Science. It was his medical training which framed Hrdlička's mind for his view of humans. During his studies he worked at a homoeopathic hospital for the mentally ill. By studying the skeletons of the deceaded patients he hoped to learn more about the causes and effects of mental illness. It was his meticulous collection and analyse of these samples which set the template for his later studies. 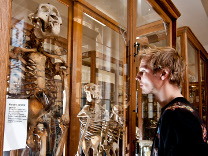 His realisation that he needed samples from healthy humans led him to examine remains more widely. This work led him to his most famous studies of native American Indians, Mexican remains, and those from South America. At this point he had taken a position at what is now the Smithsonian Museum for Natural History. During his time there he went on frequent expeditions to develop his research, because of this he published his theory that the original settlers of the Americas came from Asia and Siberia. By the time of his death in 1945, he was a prominent and ground breaking anthropologist who had a collection of over 15,000 human remains which he donated to the Smithsonian Museum and the Museum of Anthropology .

However Prof. Buikstra went on to discuss how in recent years Hrdlička has fallen under criticism, mainly for his treatment of human remains. Many anthropologists and commentators feel he was insensitive and inhumane, which had led to an outcry for the return of some of his specimens to their respective families. Recently the Smithsonian Museum has released much of his collection so that the remains may be buried. Although most anthropologists defend Hrdlička by pointing out that this was standard practice for studies during his career and that he was a product of his time. Another area which has attracted heated argument is the view that Hrdlička may have supported theories of Eugenics which cast white people as a superior race. Some have even go so far as to call Dr. Hrdlička racist. This accusation is not entirely justified, Hrdlička was friends with scientist who supported this theory, but he himself never committed, stating that he wanted more evidence before he would accept it.

The lecture finished by discussing his achievements and legacy. Which include the foundation of the American Journal of Physical Anthropology in 1918. The journal remains to this day to be a major publication in anthropological circles, producing influential and up to date articles on work being carried out through out the world. He also provided the fund for the foundation of the Hrdlička Museum of Anthropology in Prague which houses many of his specimens found during his expeditions. 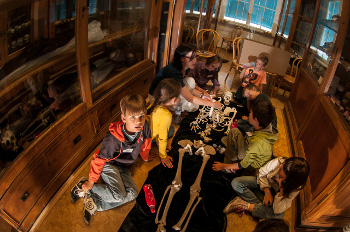 His work also directly led to the development of Bioarchaeology which is a growing field of study today. It focuses on the archaeology of burial sites mainly, looking not only at the remains but also the context of the grave. From this archaeologists have made great advances in the dating of remains, identifying sex, and providing an accurate age of death. One example of a major breakthrough this has led to is the discovery of Tuberculosis and Syphilis in American populations before Europe discovered the Americas. This puzzle piece has enabled scientists to learn a great deal about the evolution of these diseases. The most important development of anthropology which Hrdlička was responsible for is perhaps his standardisation of research methods and data collection. This meant that studies could be compared more easily and data more widely shared, studies became more reliable and accurate which has been hugely beneficial to physical anthropology.

The lecture was informative and fascinating and it is well worth keeping an eye out for more guest lectures within the university.