There are more than 3‚000 species of termites, and their combined mass is greater than the combined mass of all human beings on the planet. They’re best known as pests that can gnaw through your house, but only in recent years has more research been done into their significance for the ecosystem. Faculty of Science graduate Aleš Buček is researching their evolutionary development and kin relationships on the Japanese island of Okinawa, widening our knowledge of the six-legged insect. 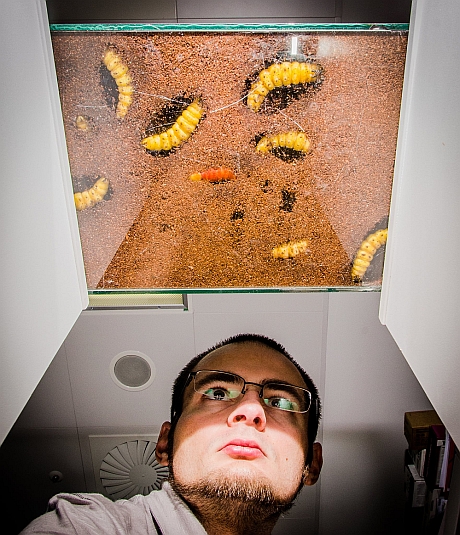 How exactly does a Czech scientist get into termite research in Japan?

I got into it through my friend and colleague, Jan Šobotník, who studies termites and has his own research team at the Czech University of Life Sciences Prague. At first, Jan and I knew each other more from the pub. We’d never done a project together, but the more he told me about termites, the more interesting the subject sounded. Termites are essential for the cycle of organic matter in the tropics and subtropics, and yet we actually know very little about them. Towards the end of my doctorate, I started working on a termite project which I then took to Japan.

During my studies I met the Belgian Tom Bourguignon, who researches termites. And he started a new research group in Okinawa, and he offered me a postdoctoral position, which I accepted.

Okinawa is a bit like Robinson Crusoe’s island. The southern third of the island is densely populated – with about a million people – but the rest is subtropical evergreen forest. If you want to go anywhere else, you have to fly. Everyone handles the conditions differently: it suits some while others suffer from a feeling of isolation after a certain amount of time. I live a lot within the bubble of an international research institute that was begun from a green field. I don’t have experience with a truly Japanese institute – they’re probably significantly more Japanese than the Czech ones (laughs). I’ve heard that for a foreigner they’re quite inhospitable environments.

Why, is it due to the language barrier?

Yes, the Japanese often do not speak English. I only have Japanese friends within the institute. And I’ve been studying Japanese for two and-a-half years, but understanding it is complicated. In Japanese, for example, there are a lot of honorific registers, and completely different words are used depending on the level of honorifics. I can now usually say what I need, but I don’t understand most of the answers (laughs). The Okinawa Institute of Science and Technology (OIST) has an advantage in this: the official language is English and most scientists come there as foreigners into an unknown environment and that unites people and brings them together.

To come back to termites, why is it important to study them?

Termites are the engineers of the ecosystem. They feed mainly on wood or the organic material in soil, such as clay, and they are the main decomposers of dead organic matter. In the Czech Republic, earth- worms, mushrooms and wood-boring beetles per- form a similar function. In warmer areas, termites are notorious as pests that will “eat your house.” Globally they cause damage estimated in billions of dollars. This is why most research focuses on how to eradicate them. Only recently have we begun to understand a little more about their crucial role in nature. 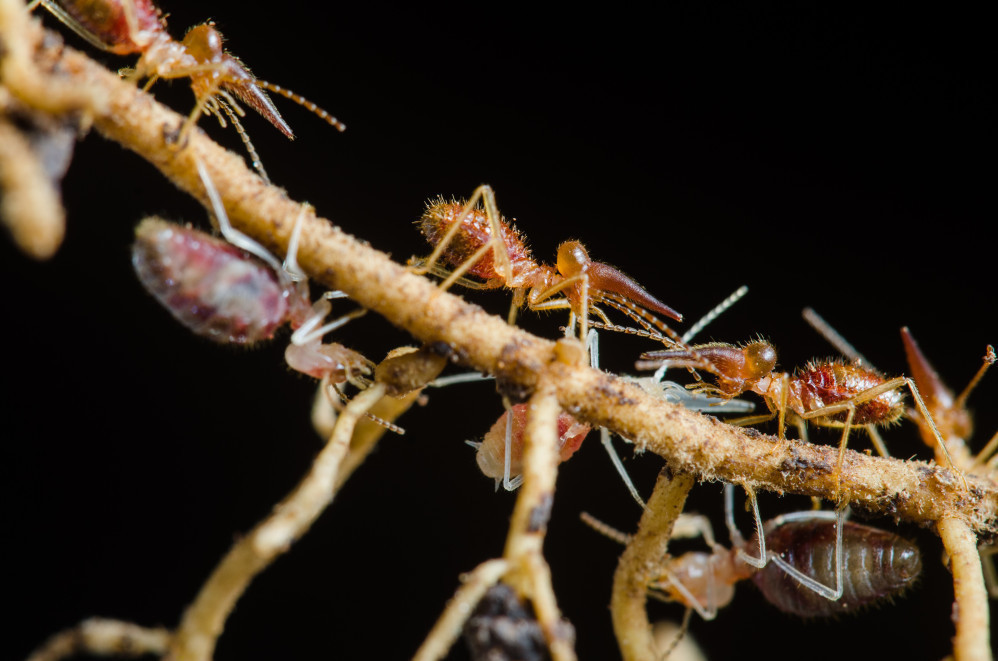 There aren’t termites in the Czech Republic?

Not yet, but it’s probably only a question of time until they start appearing in the Czech Republic due to global warming. To survive, termites need the temperature to be above 10 degrees Celsius long-term. Southern Moravia and Prague already have average annual temperatures of around 10 degrees, and fewer and fewer days are below freezing. So it’s likely that they’ll settle here eventually. Even so, we can remain calm for now: termites in the Czech Republic will have a rough time due to our four seasons.

How important are termites to ecosystems where they are endemic?

Very! Compared to how inconspicuous they are. For example, in experiments where all termites are chemically exterminated, and that place is com- pared with a controlled area without intervention, significant changes are observed. Termite-free areas contain more dead organic matter, less plant germination, and even cause lower yields of agricultural crops such as grain. The negative effects of termite extermination are particularly pronounced during periods of drought.

What else should we know about termites?

They are most widespread in the tropics and sub- tropics, and there are more than 3‚000 species. Although they resemble ants, they’re actually a group of cockroaches that live socially. Like bees or ants, they live in colonies. The size of workers and soldiers ranges from a few milimetres to a maximum of two centimetres. Queens are significantly larger, and can grow up to 10 centimetres in length. Workers and soldiers live for weeks to months while queens can live up to 30 years. Some species of termites have developed chemical weapons and will commit suicide if threatened. Their bodies literally explode, releasing a fluid that turns toxic outside the body, destroying the enemy.

What is your current research about?

I’m doing basic research: describing the evolution of termites and their kin relationships, which will help us understand their importance for the ecosystem. We have described a kinship tree of nearly seventy selected termite species and a time scale of major events over 150 million years of termite evolution that can be derived from fossil evidence. With our article published in Current Biology, we have quite dramatically changed the accepted hypothesis of changes in symbiotic relationships during termite evolution. It’s probably still a long way to go before our knowledge is applied directly into practice, but it is the most basic knowledge that we’ve lacked so far. 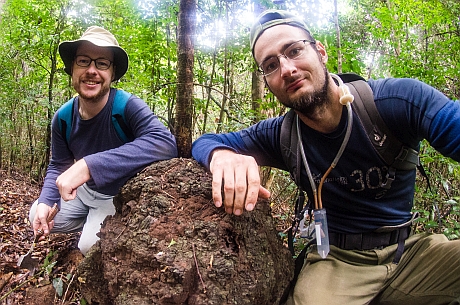 What specifically did you come up with?

Based on sequenced termite transcriptomes and other information, we created a kinship tree from which we can derive a lot of information. For ex- ample, it was previously known that 50 million years ago there was a sudden evolutionary change in the intestinal symbionts of termites – one termite lineage lost their wood-digesting protozoa and replaced them with bacteria that enabled them to utilize organic material from soil. This led to the most evolutionarily successful group of termites, which today make up more than 80 percent of current termite species. Earlier hypotheses assumed this change occurred through an evolutionary intermediate step – “cultivating” symbiotic fungi or bacteria outside the body, in “gardens” inside termite mounds. This “cultivation” is really practiced by one developmental branch of termites. We proved that it was not a common intermediate step of all lines, but only a “side” branch.

What are your next research plans?

I’m currently writing grants and looking for a position to set up my own research group. I still live in the dream of an academic career, even though there are few positions and there is considerable competition. I have now submitted a Czech Science Foundation Junior Star grant, which I would work on at the Czech University of Life Sciences with a small team with international cooperation.

What would your research team do?

Thematically I want to stick with termites, and I want to continue researching the organisms that live in symbiosis with termites. Which aren’t just the microorganisms in their intestines. I want to study genetic changes in insects that have adapted to life in termite mounds. Many species of beetles and flies live as parasites or harmless “roommates” in termite nests. At first glance, it is striking for these species that several times in evolution they have independently gained similar adaptations for life inside the termite mound. It almost looks as if the evolution of these flies and beetles was predictable. Which is a great opportunity to study the role of determinism versus randomness in evolution. 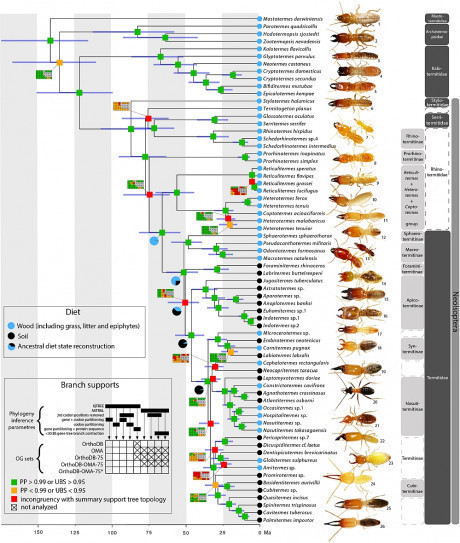 As a scientist, what’s a typical day for you?

Nowadays, I don’t spend much time in the laboratory. Most of the time I sit at the computer. Although I’m not a computer scientist or programmer by education but am self-taught, I spend a lot of time on analysis and data processing. But I always try to have other projects that get me into the lab. And the most beautiful is field work, where we always go “termite hunting” for two to three weeks at a time. Just before the first lockdown in the spring, I spent two-and-a-half weeks in Cameroon, last year in Madagascar, and one long-term project is underway in Malaysia. But the total amount of field work comes to roughly a month and-a-half per year.

How is fieldwork conducted?

It always depends on the project. Usually we collect specimens of as many species of termites as possible for further genetic analysis. A long-term experiment is underway in Cameroon and other tropical areas, where we observe the amount and diversity of termite species and how termites affect processes in the soil.

How do you look back on your studies at Charles University?

I remember them only in a good way. I met many great people there. I graduated in biochemistry from the Faculty of Science, where we had a lot of compulsory lectures. I don’t know if it’s changed since then. Looking back, I would have appreciated more freedom in choosing subjects. I found myself wanting more biology. 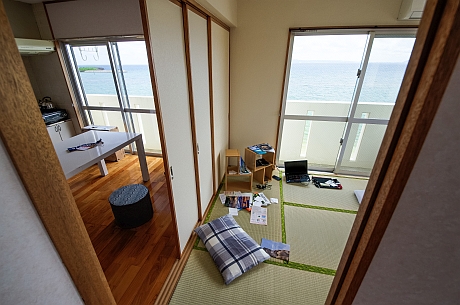 After your bachelor’s degree you worked in laboratories in the Institute of Organic Chemistry and Biochemistry of the Czech Academy of Sciences. What did you do?

I dealt with the language of insects, how organisms communicate using chemical substances – pheromones.

Where do you get your inspiration?

I find the greatest source of inspiration in nature. When a person is out in the field, many things come to mind. Another inspiration for me is of course reading and talking with my colleagues (ideally over a beer).

What do you enjoy besides science?

I like to climb and hike in the mountains, which can’t exactly be done here in Okinawa. But I’ve started diving, and I really enjoy it. I often go in the morning before work. I could jump off the balcony straight into the sea where I live - if it wasn’t so shallow. There’s a coral reef 50 metres from the shore, which offers incredible diversity that is very similar to the tropics. I’m a little bit sorry that termites weren’t evolutionarily successful enough to colonise the sea as well. So it’s hard to combine diving with my work (laughs).