Researching social interaction during the pandemic

March 1 marks exactly one year since the Czech Republic registered its first two cases of Covid-19. The country's handling of the first wave went from success story to woeful results ever since, leaving the health care sector reeling and leaving many wondering what went wrong. Some answers are provided in a new study called Social Contacts in the Time of Covid by economists at the CERGE-EI think-tank IDEA. Looking at different socioeconomic groups, Filip Pertold and Tomáš Lichard analysed interaction throughout 2020, beginning with the first lockdown in March and ending with the resurgence of the virus in the autumn. In their research they examined factors that contributed to the spread of Covid-19. 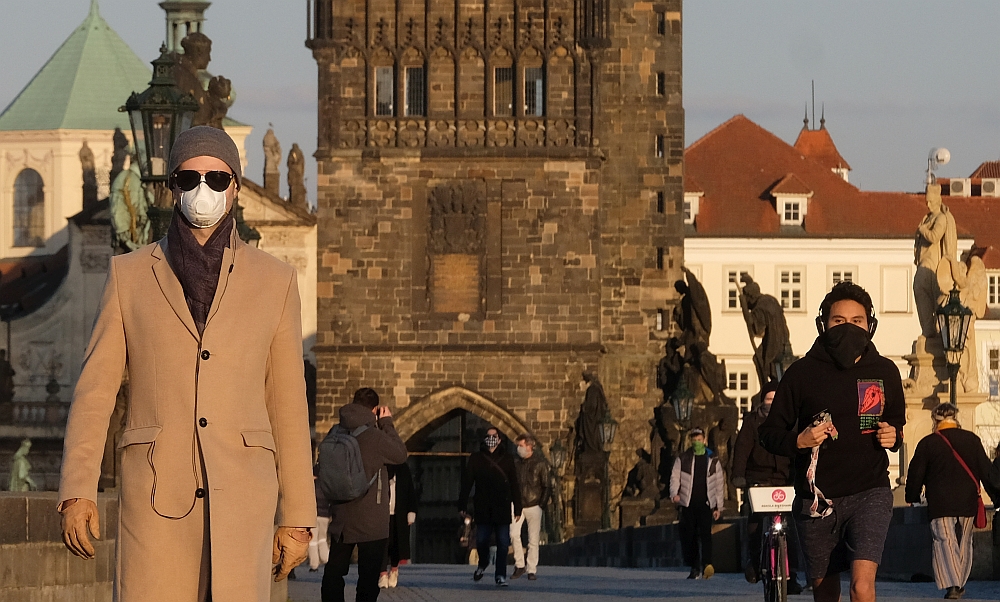 The first lockdown was far stricter than the one that followed. In the second, tougher measures were seen by many as unacceptable.

Previous research by IDEA (the think-tank at CERGE-EI which is a joint workplace of Charles University and the Czech Academy of Sciences) showed that only about a third of the Czech workforce was able to work comfortably from home during the pandemic. Employees in industry or manufacturing, for obvious reasons, couldn't stay away for months at a time. In the first wave, however, everything grinded to a halt. But that situation was not repeated and the research by Pertold and  Lichard suggests that the one area where far greater care should have been taken and more restrictive measures applied in the second wave was in the workplace. A sharp change or drop in the number of people able (or willing) to work from home when Covid-19 reemerged with a venegeance in the autumn, had a significant impact. According to their findings, interaction in the workplace was riskier than any other, including visiting friends and relatives, vacationing, or going to pubs or restaurants. 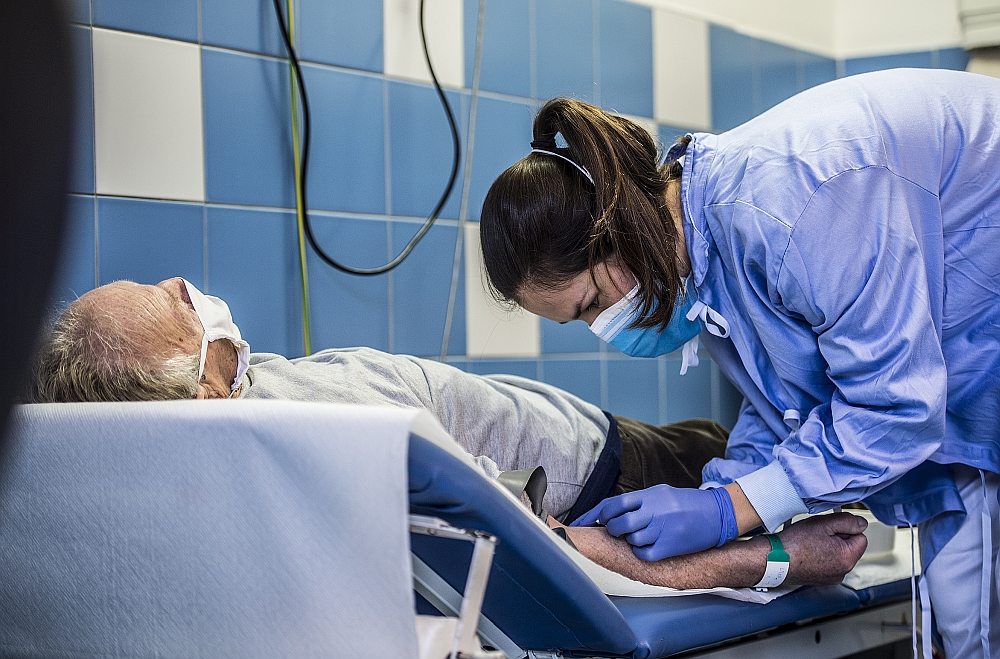 There are mutliple reasons things went wrong in the Czech Republic. CNN looked at some of them;  the study by IDEA at CERGE-EI at others.

Filip Pertold told Forum more about the  factors that either limited or contributed to the spread of Covid-19.

What we did was analyse social interaction over time across different periods in 2020 and we looked at different socioeconomic groups. We compared the situation from the first spring lockdown. That first lockdown was a huge blow to society and we contrasted that to different periods over the year, comparing interactions and how they were affected by people. The baseline period for us was the spring lockdown, mainly last March and April. While we don’t have data on before the lockdown, we did compare it to the other periods in 2020, especially the summer, when Czech society largely behaved as if the virus no longer existed, and the second one in September which was also tough, when businesses were again closed.

In the study, you looked at people who were working, those of pensioner age, younger people, employees...

Yes, and one thing that was unusual in the spring lockdown was that almost everyone had very low social interaction almost uniformly. The lowest of course were retirees or the unemployed or those on maternity leave or the elderly (at the highest risk from the virus). Even those who were working had quite low interactions and that was quite a homogeneous reaction across society to the measures that the government had put in place.

Because it was the first wave, people still didn’t know what to expect, we didn’t know yet how the virus would behave. Is it fair to say people were more willing to follow strict measures then?

That was the atmosphere in society at the time and there was a high trust in the government (and other data has confirmed that), communication on the part of the government was quite clear, and you didn’t have in-fighting or arguments from the opposition. People at the time understood how to behave when shopping, what to do when going outside the home, and there was a clear-cut situation: we all knew we were in danger and everyone was willing to reduce contacts and the R number fell to well below 1. We were able to reduce the infection rate quite quickly. 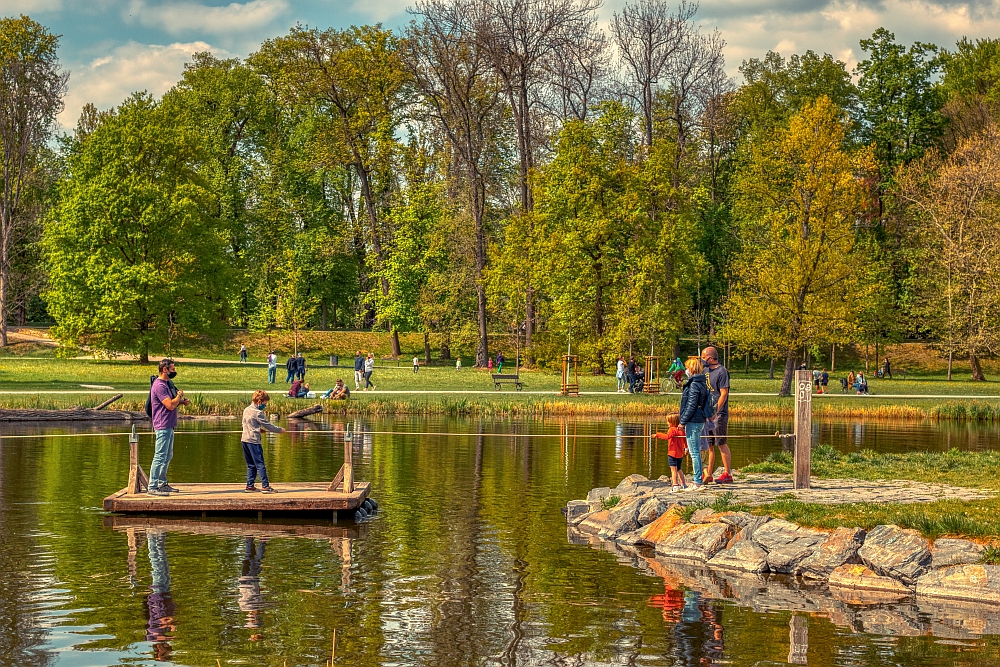 Summertime when the livin' is easy

That brings us to the summer, when the virus appeared to have largely disappeared and there were around only 50 reported cases a day at one point. In your analysis, how did people’s behaviour change? Where did social interaction increase?

In the summer there was a shift in the perception of the danger: the virus behaved differently and people are also generally more resistant to illness in the summer and the virus’ presence became negligible. All in all not just the government but the political parties forgot about the threat. So what we saw in the summer was a huge increase in social contacts per person, in all social groups. The highest increase was among students and employees. At the time, the number of people who had home office declined significantly and students went back to school to an extent and social activities increased a lot, with many visiting restaurants, which is a huge driver of social contact. We went from zero to 40 percent of people visiting restaurants.

Yet epidemiologists were warning that it wouldn’t last, precisely because all the hard measures had been dropped. Is it fair to say we were caught off guard and perhaps also that it is harder to go into a second (or third) lockdown?

There, we differed I think in a couple of things even from other countries in the central European region: we lost track of the virus, we stopped wearing masks, unlike for example in Poland where I spent time in the summer. That didn’t happen here. We behaved as if the pandemic was over and many people weren’t willing to listen. There were also many so called “experts” who said masks in and of themselves were not efficient, and the virus was pushed almost into the area of “fake news”. 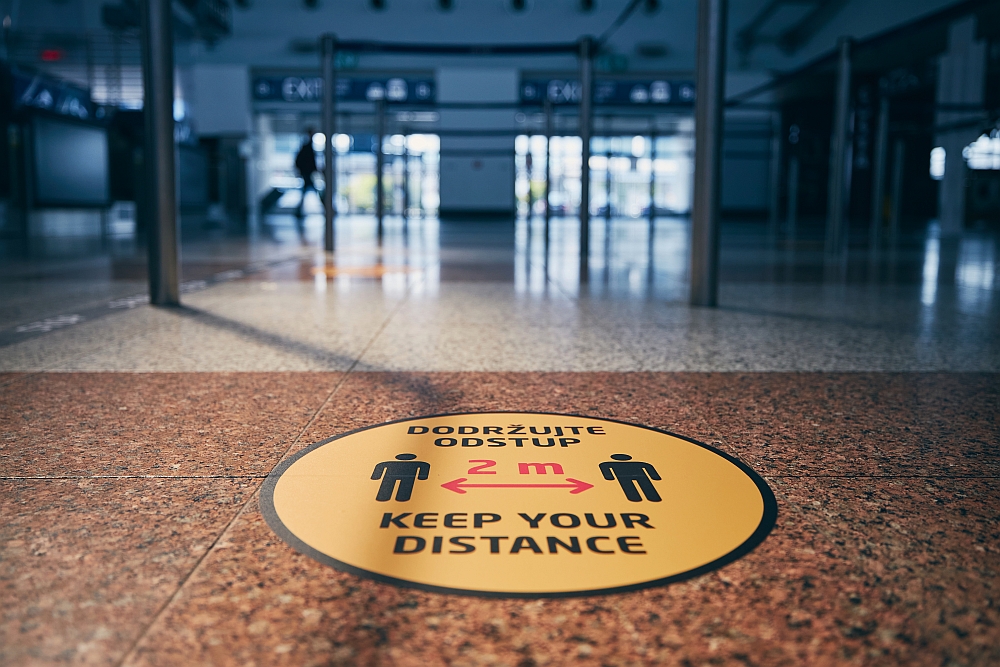 What kind of a risk did shopping or sports or even going to restaurants represent?

In the analysis, shopping was not the main driving factor behind social interaction: without a doubt those in the summer would be visits among family and friends, vacation activities, the visiting of sports centres. But if you look at the fall, in October when we basically went into a second lockdown and restaurants were closed for on site visits, what was different from the spring was the drop in home office numbers. And this has continued ever since. The prevalence of home office is lower than it was and I think that is the main difference: we can close restaurants, we can limit all services, but people still go to work and they see their friends. And that explains part of the continued high number of contacts that we registered in the fall.

Many people of course cannot work from home even if they wanted to. And long-term, economically, it was a scary proposition, for many, to close down the economy even more.

The 30 percent who can work from home is a rough number based on the industry structure: we compared our situation to countries with a similar industry structure and basically overlaid their situation and compared it with ours. As it stands, I think we are at about half of the number of people who can work from home. That begs the question “why”. I think it is because many firms were not willing to take the threat seriously or were no longer willing to change their behaviour as they had in the spring. 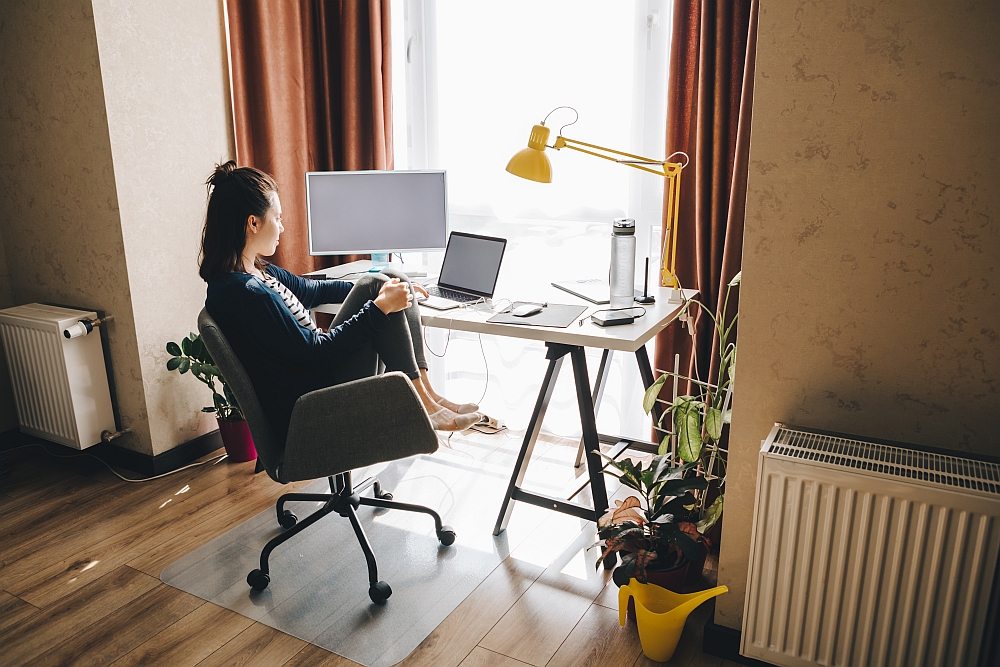 You have the manufacturing industry fully open, which wasn’t the case in the spring and even firms where home office would be possible no longer wanted to continue with it. The broad perception is that compliance with government restrictions is low among the general public but the data shows that that compliance hasn’t changed much since the fall. What is different is that the virus is more dangerous as it spreads more easily and much faster now and firms are less willing to rely on home office as they did last spring.

The variants changed everything

Now new variants of the virus are in the mix and likely to become dominant and we are not seeing the infection rate go down but the opposite, with more and more people in ICU. Where does that leave us? The government has passed new measures – a new hard lockdown limiting mobility for three weeks as of March 1. Will it be enough or will more comprehensive measures be needed? 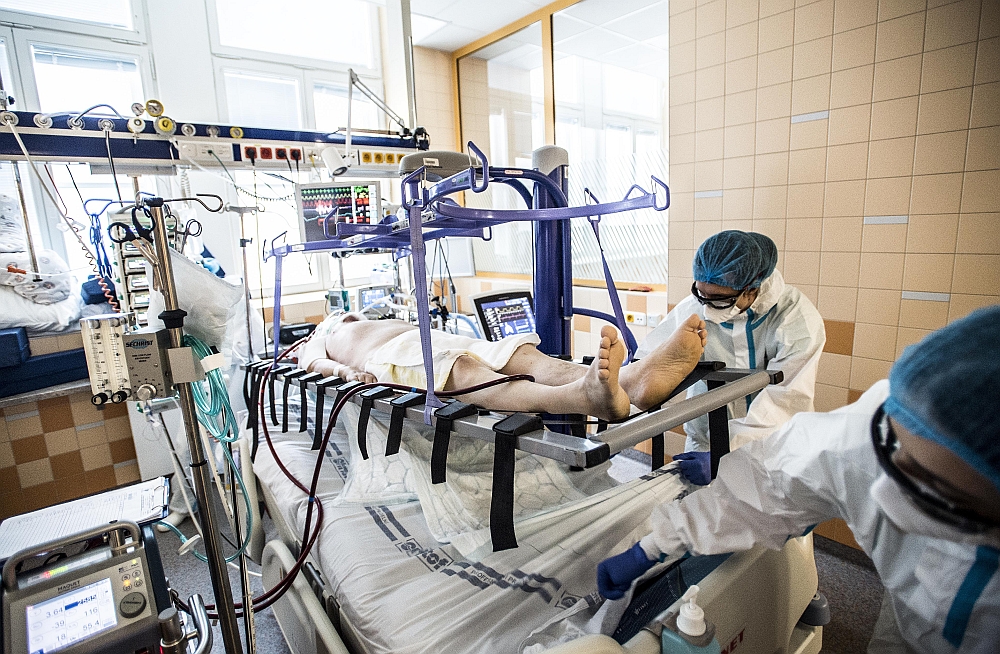 I think that we are still not yet willing to face the seriousness of the situation. The predictions are bad, with a reproduction number is well above 1, which essentially means the epidemic is exploding. We are already stretched to almost full capacity in the health care system and the situation will for sure only get worse over the next two weeks. Even if the government introduces tight new measures right now, it will take at least two weeks before the effect is felt.

It is bad and I worry that even the latest measures being discussed will not be enough. There are at least two reasons for that: I think that compliance by the public will be very low because people are simply tired of being in lockdown for the last two months, and the other factor is that the Czech Republic is specific in its economy in that 37 percent of its employees work in industry.

This is different from Israel, for example, where only 17 percent is industry and the rest is services. The industry sector because there the virus can spread quickly, there they work physically and it can be hard to work with masks. So if industry continues as it has, and there is no plan to shut down of industry here, my worry is the numbers will go down too slowly and the health care system will run out of capacity very soon. The main measures do not target workplaces enough and that will have an effect. 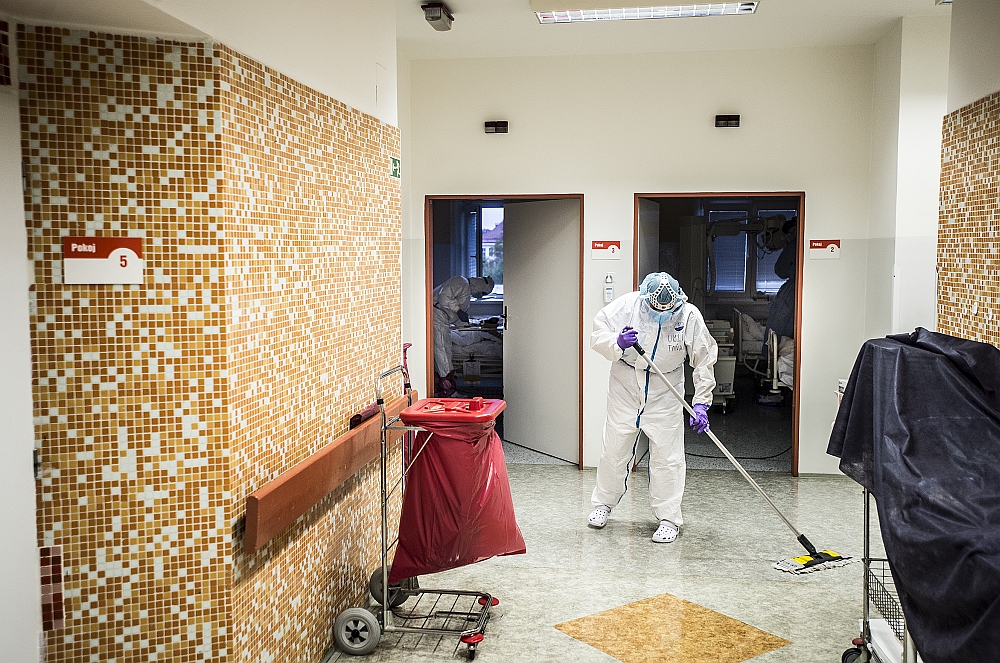 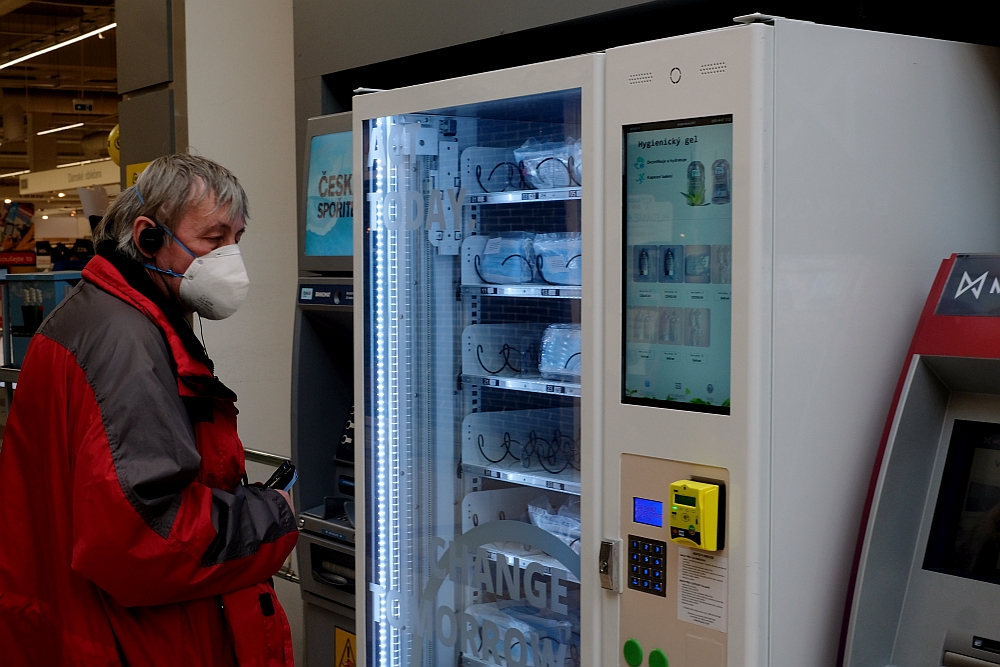 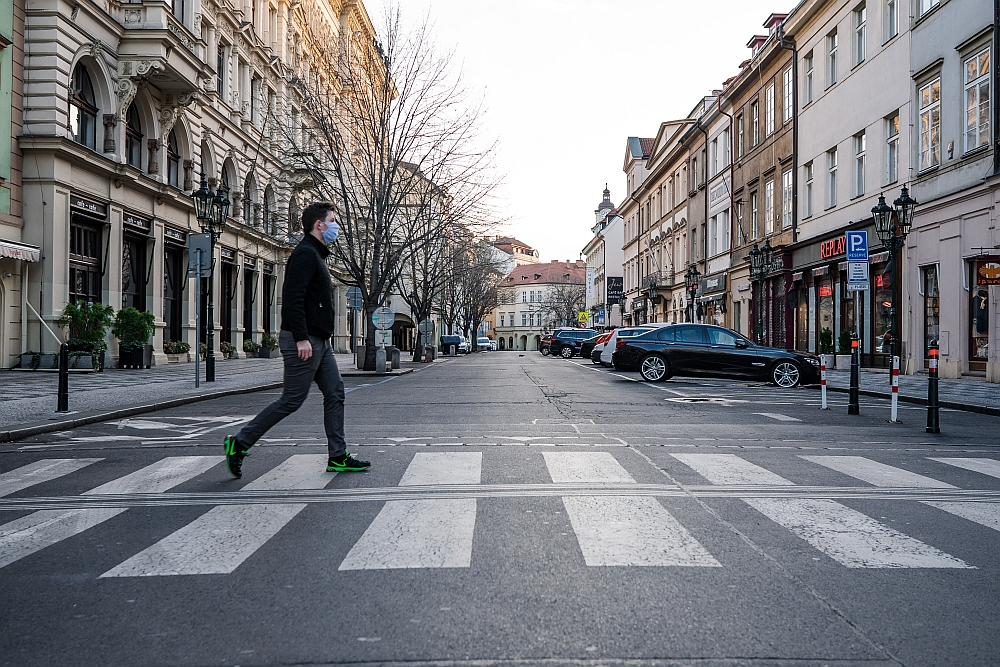 Life is not likely to return to normal soon: an orderly mops up; a  vending machine with face masks; crossing a largely empty street in Prague.

It isn’t. We will see the political pressure will increase and once all parts of the country are as hard hit as some regions in the west and north already are, the government will be forced to shut down industry anyway. And the crisis will last longer and it will be too late to avoid excess deaths that we have already seen increasing.

When I communicate with political representatives, it is clear the industry lobby is trying to avoid shutdown and are trying to shift the measures elsewhere: for schools to shut down instead and other sectors of society. A positive in the industry sector is that they have started wearing masks and the testing of employees will also begin in March. If they had implemented the changes in January, we might have been in better shape. My perception is that it’s too late. 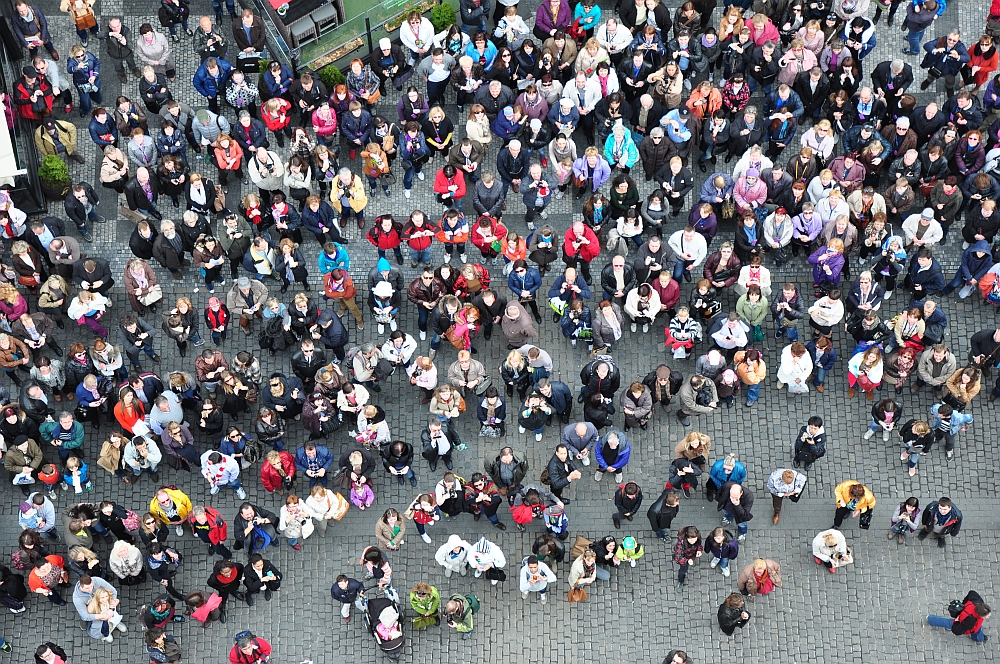 Before the virus: crowds used to gather to see the top of the hour at the famous astronomical clock on Prague's Old Town Square.